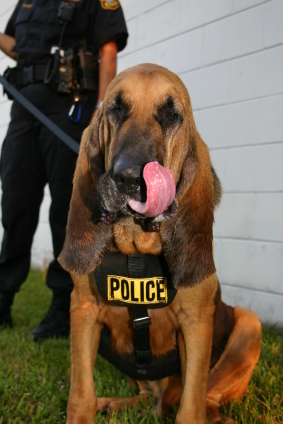 The bloodhound may have
some competition for his job
In an advance toward developing the first sensor for detecting human bodies buried at crime scenes and in natural disasters, a scientist speaking at the American Chemical Society meeting last week said he had devised a profile of compounds released from decomposing bodies. The compounds detected could lead to an electronic device that would determine the time elapsed since death, quickly, accurately and on-site.

"We're hoping that we can use specific target compounds to develop an electronic sensor but we're in the early stages of development," Dan Sykes, Ph.D., a researcher at Penn State University, tells DOTmed News. He adds, "We have found a correlation between the two initial stages of decomposition and a chemical profile."

He notes that decomposing bodies release more than 30 compounds. Some, like "putrescine" and "cadaverine" develop soon after a person dies. Sykes found that the range of decomposition between zero to two days, and days three and seven are different.

"Our job now is to make sure that similar compounds that are released are not confused with the target compounds that might be used in an electronic sensor," he tells DOTmed.

Sykes says he will try to collaborate with the Tennessee researchers and with another group at University of Athens in Greece, who recently published an article on the "smell of death" compounds.

Penn State has some knowledge of sensors and is working with "a couple of companies" developing devices that sense explosives, Sykes says. However, the time is not yet right to approach these companies with his forensic sensor data.

"We have tons of data, but before we speak to a potential partner [who would help develop and market the device] we need to further evaluate the data and make sure our studies are reproducible," Sykes says.

He says that now, dogs are the gold standard for detecting and recovering bodies in earthquakes, tornadoes, hurricanes and other disasters. But police department dogs have to have a "partner," or handler who trains them, a major expense, Sykes says.

"I think any electronic sensor will be more cost-effective than a dog. But will it be viable? That's what we're trying to find out."

He says the sensor won't require FDA approval, as it's not a medical device.