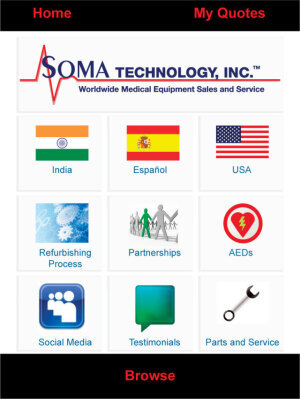 The Soma App (Credit: Soma)
For hospitals, surgical centers and medical dealers looking to buy everything from C-arms to automated external defibrillators, one equipment seller hopes they'll go shopping on their phone.

Consumers are used to buying books and songs from tablets and smartphones, but Soma Technology Inc., a Bloomfield, Conn.-based dealer, said this week it's launching what it claims is the only capital equipment shopping app. "As far as we know," explained Vance Chatel, marketing coordinator with Soma who helped design the app, "we're the first."

Called Soma App, it lets would-be buyers or renters browse its catalog of new and used capital equipment and make quote requests, all from their smartphones. Currently, the app works on Android phones, iPhones and iPads, and can be downloaded from iTunes and AndroidZoom.

Soma began designing the app in mid-2011, and the company has been testing it since April, Chatel said. It was designed partly in-house, and then they outsourced the programming.

Katherine MacCall, Soma's marketing manager, said the company made the decision to create the app after reading marketing reports showing rising demand for iPads and other tablets, as well as statistics indicating more people than ever are working on the go, and away from their offices.

"It really was based on marketing forecasts for mobile access really being the next big thing, and we didn't want to miss that boat," Chatel said.

It's a pretty big boat. According to International Data Corporation projections, vendors shipped nearly half a billion smartphones last year.

Because of the nature of the medical equipment industry, the app does differ from a more consumer-focused shopping program. Users aren't buying directly on the app, nor are prices listed. While browsing products on Soma App, users find equipment they want to buy or rent, adding them to a sort of "shopping cart." When they submit the items in the "cart," it sends a request for quotes for the products to Soma's sales team.

MacCall said it's too early to say how the app will be used, but she expects initially most activity will come from medical dealers, their "high volume" buyers. End users, such as purchasing managers, equipment planners or whatnot, would probably be exposed to it at trade shows, such as the Ambulatory Surgery Center Association's 2012 meeting in Dallas, where the app's making its formal bow on Thursday, being shown by a sales team attending with three iPads. When talking to potential customers, instead of leading them to a computer, salesmen can just whip out their phone or tablet and show the company's catalog online.

So far, Chatel said they don't have download figures yet, as the app only became available on Monday, but they've already received a few quotes.

"We even got one from Iraq," MacCall said, "a substantial quote."