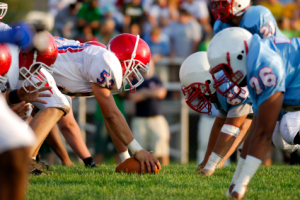 With the football season about
to begin in the U.S., new
research suggests the serious
toll of concussion
Using a recently developed MRI-based brain scanning method known as Diffusion Tensor Imaging (DTI), researchers at Albert Einstein College of Medicine of Yeshiva University have been able to show that concussions cause brain damage. They have also linked areas of brain injury to specific impaired cognitive functions.

Michael L. Lipton, MD, PhD, who is lead author of the study, tells DOTmed News in an email interview that "it is the axons or nerve fibers--the brain's wiring--that are injured in traumatic brain injury....DTI is specifically sensitive to even subtle disturbances of the microscopic structure of axons and is thus ideally suited to detect traumatic brain injury (TBI)."

DTI has been used to look at other brain disorders, but this is the first study to focus on concussions, Dr. Lipton, who is associate professor of radiology, of psychiatry and behavioral sciences, and of neuroscience at Einstein, tells DOTmed.

At present, diagnosis of concussions is based primarily on the patient's accident history and on clinical examinations that check for common concussion symptoms including headache, dizziness and behavioral abnormalities, he says. There is no way of knowing from these exams who will suffer the most severe consequences and who will recover quickly.

"By detecting brain injury early with DTI, and then initiating cognitive rehabilitation therapies for those patients, we may be able to limit the effects of concussions," Dr. Lipton says.

The Einstein research involved 20 people known to have suffered concussions (18 from motor vehicle accidents and two from falls) and 20 healthy control subjects. The patients were recruited from one hospital emergency room; two of them had lost consciousness, but only for a few minutes.

Both the patients and control subjects underwent conventional brain imaging with magnetic resonance (MR) and computed tomography (CT) scanning, plus a battery of neuropsychological tests to assess executive function, which is often impaired after a concussion.

All concussion patients underwent brain imaging and testing within two weeks of their accidents.

Experienced reviewers who evaluated the conventional MR and CT images of patients and controls found no abnormalities in either group. However, the neuropsychological results showed that the patients performed significantly worse than the controls on tests of executive function.

Patients and controls also underwent diffusion tensor imaging (DTI), which detects subtle changes in the brain by measuring the diffusion of water in the brain's white matter.
1(current)
2