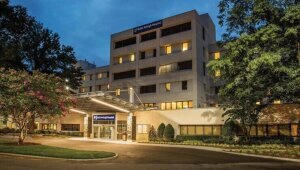 A patient at Duke Raleigh Hospital punched a nurse unconscious and broke her nose and eye socket. (Photo courtesy of Duke Health)
An attack against a nurse has driven Duke Health in North Carolina to deploy extra security measures to protect its employees, as the number of these incidents continue to mount.

Stanley Scarboro, a patient at Duke Raleigh Hospital, was arrested on July 28 after allegedly punching an emergency room nurse in the face, knocking her unconscious and breaking her nose and eye socket. He then broke a security guard’s finger and threatened several other people in the ER, according to The News & Observer. The attack is the second this year to occur at a Duke Health facility against a medical staff member.

As a result, some of Duke’s hospitals, including the Raleigh location, are stationing more security guards in the ER, closing off some entrances to the public and making it easier for staff to phone for help in an emergency. They also are hanging up orange signs outside their facilities, warning that aggressive behavior may lead to removal from the premise or prosecution.

“We have a zero tolerance attitude toward this. As it becomes clear that there is a persistent risk, we have to persistently decrease that risk,” Dr. Craig Albanese, executive vice president and COO of Duke University Health System, told The News & Observer.

The healthcare system has experienced attacks in all parts of its hospitals, but emergency rooms and behavioral health units have been impacted the most. A patient in January at Duke University Hospital in Durham grabbed a police officer’s gun and fired multiple shots in the ER before being shot by another Duke police officer.

Attacks like these are are fueled by anxiety and fear over not being seen right away. The pandemic and rises in violence have only made these attacks more prevalent, along with COVID-19 misinformation and staff shortages. “That created a lot of anxiety and anger among the patients. It’s just unfortunately growing incivility in our country, and it’s just hitting every nook and cranny," said Albanese.

Duke Health officials are currently analyzing data to see how many attacks have occurred at their locations.

Scarboro is being held on a $30,000 bond at Wake County Detention Center for two charges of aggravated assault and one charge of communicated threats.