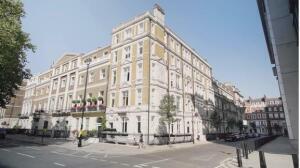 The eight-story hospital is the most recent addition to the healthcare system's international expansion strategy. It previously opened an outpatient facility in London in 2021 and also has facilities in Toronto for executive health and sports medicine, and a 394-bed hospital in Abu Dhabi, United Arab Emirates. In the U.S., it operates sites in Florida, Nevada and throughout Ohio, according to Cleveland.com.

The Cleveland Clinic London Hospital will offer medical and surgical services for cardiovascular, digestive, neurological and orthopedic specialty care. It also includes intraoperative imaging for patients requiring brain and spinal cord surgeries, and has been outfitted with state-of-the-art medical technology, including a pharmacy robot for packaging and tracking drugs as they are delivered to the patient’s bedside.

The hospital has 184 patient beds, 29 intensive care beds and eight operating theaters. It will employ 1,139 staff members, including 270 physicians and 450 nurses recruited throughout Britain, abroad, and across Cleveland Clinic’s health system. Some have even come from jobs with the NHS. Doctors are understood to be paid up to £350,000 a year.

The healthcare system signed a 123½-year lease for the location at 33 Grosvenor Place, which was converted into a 325,000-square-foot hospital with views of Buckingham Palace. Construction was initially meant to be completed in 2020, with the hospital opening in early 2021. This was delayed, however, by the effects of the pandemic.

The opening now is expected to give the clinic access to medical professionals training in the U.K. and India, as well as grow its presence in a market where it is seeing greater demand in the private healthcare sector.

"A big part of this project is for us to attract the great talent in healthcare that exists in a worldwide fashion. The more international you are, the larger talent pool that you can pull from. The larger the talent pool we can pull from, the better caregivers we have,” Dr. Brian Donley, the CEO of Cleveland Clinic London, told Cleveland.com in 2019.

Several NHS trusts in London have been relying more on the private sector throughout the pandemic, and while the hospital is mainly targeting Brits with private health insurance and those willing to pay for treatment themselves, it is in talks about offering complex procedures to NHS patients to reduce waiting lists, according to The Guardian.

While seen by some as a welcome addition as the NHS struggles to manage record waiting lists, backlogs and a resurgence in COVID cases, the establishment of the hospital has raised concerns about the emergence of a two-tier healthcare system, says David Rowland, the director of the think tank Centre for Health and the Public Interest. “London has always been the center of the private hospital market. An estimated £1 billion investment in a single hospital is a sign of how strongly foreign investors are betting against the NHS being able to meet the future health needs of the population. And the government seems entirely relaxed about this shift.”

He adds that the NHS employs 300,000 nurses but is currently facing a shortage and that “the pulling away of NHS consultants and nurses is problematic” because “private companies are paying significantly more.”