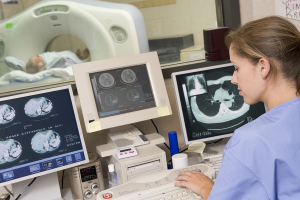 Following concerns raised by the General Medical Council about the radiologist’s work, the Northern Health Trust commissioned the review, which required it to notify 9,091 patients. It is the largest recall of patients in Northern Ireland and has so far affected 12 cases, according to BBC News.

"We believe there may be a number of patients who have died as a result of this, but we are not sure at this moment in time if they died as a result of a failure to diagnose something or not,” Dr. Seamus O'Reilly, medical director at the Northern Trust, told BBC Radio Foyle Wednesday.

The images were taken at Antrim Area, Causeway, Whiteabbey and Mid Ulster Hospitals as well as the Ballymena Health and Care Centre. The doctor worked at these facilities between July 2019 and February 2020, according to the Belfast Telegraph. O’Reilly says it is his understanding that she is no longer working with the National Health System (NHS).

About a fifth (2,434) of the images have been assessed so far. The discrepancies concern categories the doctor assigned to the scans, according to O’Reilly. "Most of these concern CT scans where inaccurate initial reading of the scans could, or is likely to, have had an impact on the patient's clinical treatment and outcome.

Images are reviewed each Friday by a clinical sub-group, which discusses images labeled as level one or two, and some level three, to determine who may need to be called again. It has considered a total of 31 patients, to date.

The Northern Trust has also brought in the independent sector, retired consultant radiologists and radiologists from other trusts to help with the review, and is providing psychological services to patients who feel particularly anxious. A telephone help line set up has so far received 996 calls, while the Trust has received 75 emails on the issue.

In addition, a Serious Adverse Incidents investigation is being carried out and the trust plans to liaise with affected families “in due course,” says O’Reilly. He says it has so far sent out 1,655 closure letters to let patients know that no cause for concern has been identified with their cases, and that it hopes to complete the review as soon as possible.