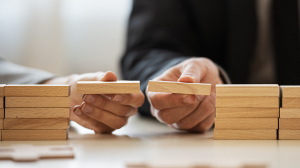 The two signed a contract this month to move forward with the merger and will partner on it with Brown University’s Warren Alpert Medical School, which will contribute $125 million over five years to support its development.

“You want to go to a place where you have the best care you can get from a diagnostic and therapeutic perspective — a place that does cancer research, but that also has the latest in protocol-driven therapies so you can be with your family for many years to come. And this is the difference that an integrated academic health system can make in patient lives. This is real,” said Dr. Jack Elias, dean of the Warren Alpert Medical School, in a statement.

Talks of a potential merger began in September after similar talks failed the year before. It is the fourth time that Lifespan and Care New England have explored a possible merger since the 1990s, according to the Boston Globe, with a long regulatory process expected. Care New England even turned down a $550 million buyout offer from Pennsylvania’s StoneBridge Healthcare back in December, due to its commitment to a possible merger with Lifespan.

Brown will participate on the governing board of the merged system and help integrate medical education and research with clinical practice across all hospitals. Its investment will fund potential initiatives laid out in a joint strategic plan that includes improving access to women’s health and eliminating health disparities.

Critics say the merger will decrease competition and possibly increase overall healthcare costs, though the hospitals and Brown say it will increase healthcare and economic opportunities while protecting patients and community hospitals. They next face regulatory approval from the Rhode Island Department of Health, the state attorney general’s office, and the Federal Trade Commission. The FTC previously said yes to a merger attempt back in December 2007 but the state rejected the application at the time, on the grounds it was “incomplete,” reported the Boston Globe.

“What I am most excited about is the ability of our new, locally based, academic health system to compete at a national level, innovate, attract top talent, develop new scientific knowledge, improve the care we deliver and serve as an economic engine for Providence and the state,” said Lifespan president and CEO Dr. Timothy Babineau. “This is an exciting moment in time, we cannot let it slip through our grasp yet again.”

The state legislature will review the specifics of the merger to ensure patient care and healthcare jobs are not negatively affected.