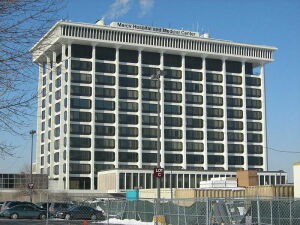 Chicago’s oldest chartered hospital filed for Chapter 11 bankruptcy protection Wednesday in U.S. Bankruptcy Court for the Northern District of Illinois. The decision is seen as a step toward its goal of shutting its doors completely by May 31, reported the Chicago Tribune.

“By pulling this lever it again shows us that they do not want to provide healthcare to the South Side of Chicago,” said Rep. Lamont Robinson, D-Chicago, whose district includes Mercy.

The intent to close was made public by Mercy’s parent company, Trinity Health, in July, after a planned $1.1 billion merger between it, Advocate Trinity Hospital in Calumet Heights, South Shore Hospital in South Chicago and St. Bernard Hospital in Englewood failed.

The news angered members of the community who said it would hurt healthcare access and local businesses, with some searching for a buyer to save the hospital. Many are also concerned because the hospital serves a large number of patients on Medicaid.

“I think it’s disgusting. I don’t think it’s truthful,” Anne Igoe, vice president for hospitals at SEIU Healthcare Illinois, a union that protested the closing plan but does not represent Mercy employees. “I find it hard to believe how bankruptcy can come out of a company that has 265 days of cash on hand.”

The backlash led the state board in December to vote against the closure and last month against Trinity’s application to open an outpatient care center on the city’s South Side (two miles away from the hospital). Trinity asserted that more outpatient care, such as urgent care services, is needed on the South Side, but critics argued that it was no replacement for a full-service hospital and would leave members of the community with inadequate healthcare.

The bankruptcy creates a number of ways in which Mercy could sell the health system or its assets, reorganize or liquidate. Its estimated assets and liabilities range from $100 million to $500 million, with an estimated number of creditors between 200 and 999, according to the filing. The hospital, which has been in business since 1852, chalked its decision to file for bankruptcy up to loss of staff and financial challenges, according to the Associated Press. “The quality of care at Mercy is an increasing concern as physicians and other colleagues have left Mercy and operating losses have accelerated to $7 million per month.” David Southwell, chair of Trinity Health’s board, said in a document in the filing.

It estimates that bankruptcy funds will be available for distribution to unsecured creditors. “We are continuing in the regulatory process with the Illinois Health Facilities & Services Review Board,” Mercy spokesman Sophie McCarthy said in an email to the Chicago Tribune. “We still intend to close everything but will transition to offering walk-in services in the ER and deliver care for the community until the Mercy Care Center opens.”

McCarthy says the hospital is currently acting as a basic ER and plans to keep its ER services open until an urgent care opens. Trinity is scheduled to go before the state board on March 16 with its application to close the hospital.