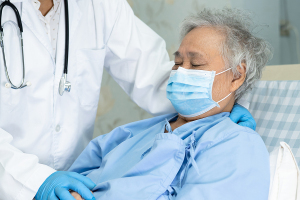 Costs and distribution of claims lines associated with COVID-19 varied among age groups and geographic regions.
Uninsured or out-of-network patients who underwent inpatient care for COVID-19 paid a median charge of $45,683 if they were age 51 to 60 and $34,662 if they were 23 to 30.

That was one of the findings of the FAIR Health study, Key Characteristics of COVID-19 Patients: Profiles Based on Analysis of Private Healthcare Claims. Examining private insurance claims associated with COVID-19 diagnoses made between January and May, the report found the highest average allowed amount paid to a provider under an insurance plan was $24,012 for those between 51 and 60, and at its lowest, $17,094 for patients above 70.

"The findings show that costs vary by region, age and whether the cost under consideration is a charge amount or an allowed amount," Robin Gelburd, president of FAIR Health, told HCB News. "Charge amounts, which are billed to uninsured patients, are typically higher than allowed amounts, which are the total fees paid to a provider under an insurance plan. This difference may have an impact on access to care for patients who are uninsured."

The virus on a national level was associated most commonly with patients between 51 and 60 who had 29.9% of the distribution of claim lines from January to May. They also had nearly identical shares in both rural and urban areas at 30.2% and 30.3%, respectively.

Claims lines on the national level were similar across all age groups in rural and urban settings, though regional geographic discrepancies were found. Patients between 19 and 30 and 31 and 40 in the South, Midwest and West, for instance, had larger shares of the distribution of claim lines than those in the Northeast and the nation as a whole.

The Northeast had the highest percentage of patients who received their initial COVID-19 diagnoses through telehealth, which was used more than emergency rooms for this purpose (6.7% versus 6.2%). Office settings, however, were the most common areas for initial presentation of patients with COVID-19 nationally and in every region except the Midwest. Of COVID-19 patients across the U.S., 33.3% were presented in an office, compared to 23% presented to an inpatient facility. Patients 61 and over were most commonly presented first to an inpatient setting, which was the most common venue in the Midwest.
1(current)
2

FTC to assess impact of consolidation in healthcare