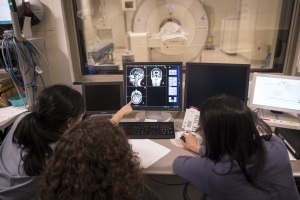 By Ying Meng and Nir Lipsman

Few among us have been untouched in some way by Alzheimer’s disease (AD).

Whether a parent or grandparent, in the clinic or at home, the challenges of the disease and the toll it takes on patients and their families is significant, and only expected to grow. According to recent statistics from the United States, AD is the only top 10 cause of death that cannot be prevented, cured or slowed. Such sobering facts highlight that despite significant advances in our understanding of its pathophysiology, genetics and brain imaging, we are still far from effective disease-modifying therapies.

However, as we look to the future, novel treatments, such as focused ultrasound (FUS), continue to be investigated as technology that may one day help close this “therapeutic gap”. FUS uses the power of ultrasound waves to influence pathways deep inside the brain without needing traditional surgery or scalpels.

Barriers to progress
The challenges of therapeutic development in AD are many, and range from our evolving understanding of its pathology, to designing clinical trials, detecting the disease at an early stage, and defining meaningful outcomes. Recognized now for decades as being, perhaps, the largest challenge: the blood brain barrier (BBB). The BBB is a feature unique to the central nervous system, and is a physical barrier, composed of tightly bound cells and processes that line the surface of fine capillaries within the brain. The BBB restricts the passage of large molecules, including potential therapeutics, into the brain, and expels certain drugs that do make it past the BBB. In cases where therapeutics do cross, failure to do so efficiently or at clinically meaningful concentrations is an important reason for poor treatment responses. In conjunction with developing targeted and effective pharmaceutical options, there is an urgent need to develop ways to enhance their delivery across the BBB, to where they are needed most, directly at the site of pathology.

Promising science
Safely and effectively overcoming the BBB has been a target of researchers for decades. To date, most attempts have required an operation, inserting catheters into the brain and infusing agents at high concentrations, as a way to “overwhelm” the barrier. Researchers at Sunnybrook Health Sciences Centre in Toronto, Canada have developed an entirely different approach, utilizing low-frequency focused ultrasound, that is noninvasive, does not require surgery or implants, and that is able to open the BBB quickly, safely and reversibly. Pioneered by Dr. Kullervo Hynynen, at Sunnybrook, this technology takes advantage of the oscillation of preformed inert microbubbles, which, when exposed to ultrasound rapidly oscillate, and cause a physical opening in the BBB that is temporary. Focused ultrasound circumvents many of the challenges of previous BBB technology, as it is image-guided, occurs in real-time, and leads to closure of the BBB within hours of the procedure.
1(current)
2
3