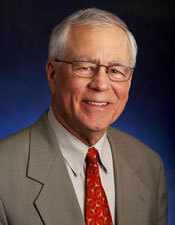 William Hendee (Credit: AAPM)
Americans are exposed to more medical radiation than ever before. And for William Hendee, that's a good thing.

"Ladies and gentlemen, this is terrifically good news," the distinguished medical physicist told attendees during a talk Wednesday at the Radiological Society of North America's 2011 meeting in Chicago.

In his lecture, "Risks in Medical Imaging: Separating Fact from Fantasy," Hendee, who edits the journal Medical Physics and won a Gold Medal from RSNA four years ago, said the increase in medical radiation -- 0.54 millisieverts per capita in 1982 to 3.0 mSv per capita in 2006 -- likely means patients are undergoing more imaging with ionizing radiation because technological advances have made it more useful to their lives.

And while he said radiologists should strive to use the lowest reasonably achievable dose, Hendee aimed to pour cold water on fears brought about by studies that predict exposure to low-level radiation -- below 100 mSv -- is causing thousands of cancers nationwide.

Reality of the risk
Several recent studies have made dire, and headline-grabbing, predictions about the rise in medical imaging in the United States. For example, an Archives of Internal Medicine article from 2009 cited by Hendee estimated that use of CT scans in 2007 alone will trigger 29,000 future cancers. Also, in a famous recent study, researchers estimated that 1.5 to 2 percent of cancers in the U.S. are caused by CT exams.

But Hendee said these sorts of predictions founder for two main reasons: they're often based on inappropriately extrapolated data, and they assume a radiation risk model that might be fit for setting safety standards, but cannot be used to estimate population risks.

For one, the source of much of the data on radiation's biological effects on humans comes from studying atomic bomb survivors in Japan. Unlike patients undergoing a CT or nuclear medicine scan, who are generally only exposed to low energy X-rays and gamma rays concentrated on a small region of the body, the A-bomb survivors received whole-body, instantaneous exposure from high and low energy gamma rays, neutrons, particles and fallout, Hendee said. Also, because of the ongoing war, they were generally malnourished and did not have access to adequate medical care -- thus, he said, they're not really a comparable population for pampered 21st century Americans receiving CT scans.
1(current)
2