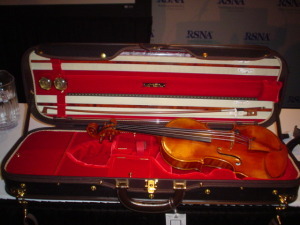 The Betts Stradivarius replica
A team-up between a radiologist and two luthiers resulted in some sweet music on November 28, at this year's RSNA.

Dr. Steven Sirr, a radiologist at FirstLight Medical Systems in Mora, Minn. partnered with luthiers John Waddle and Steve Rossow of St. Paul, Minn. to marry medical and music. Using CT imaging, the trio unlocked information about the structure and construction of some of the most highly-prized string instruments in existence, giving them the ability to create replicas.

In 1988, Sirr, an amateur violinist, was on staff at Hennepin County Medical Center in Minneapolis. A patient arrived with a gunshot wound and Sirr was contacted to do the CT procedure. He was carrying his violin, so he just brought it along. After the patient was transported out of the room, Sirr's gaze fell on his violin and curiosity took hold. "I had the CT right there and I wanted to see what it looked like," Sirr said.

The CT scan revealed a complexity of structure far beyond what Sirr had imagined. It also provided the inspiration to take the next step -- imaging instruments from the world's most respected master craftsmen.

A legacy library in CT
Sirr contacted Waddle and shared the CT image of his own violin in 1989. The two went on to scan more than 100 stringed instruments including more than 30 from around 1750. In order to gain access, the duo leveraged an important tool -- persistence. "We continually reach out to those that have these valuable instruments and it pays off," said Waddle.

Instruments made by the Amati, Guarneri and Stradivari families were loaned for the project and CT images acquired. The CT images were then imported into a 3-D graphic program which separated them into the individual components of the instrument -- the back, neck, top and scroll. A machine used those images to make precise carvings of each section. 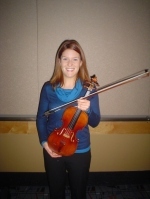 For the presentation at RSNA, a replica of the Betts Stradivarius was on hand. The original violin is one of less than 700 of Stradivari's surviving instruments out of around 1,000 total, and has been in the Library of Congress collection since being donated in 1935. The Betts is considered one of Stradivarius' finest instruments, marking the start of what is often referred to as his "golden period" of crafting.

While the original instrument, of course, wasn't on hand, those attending the presentation still enjoyed hearing violinist Brigid McCarthy play Meditation, a piece from the opera Thais by Jules Massenet.