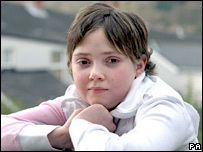 Hannah Clark was
rejecting her donor heart
In a medical feat, a British girl named Hannah Clark--who had a donor heart grafted onto her own after suffering heart failure as a baby--has made a full recovery after having the transplanted heart removed.

The operation to remove the donor heart took place 10 years after it was transplanted, and was possible because her own heart had recovered sufficiently to operate on its own.

Heart transplantation is a life-saving procedure in infants and small children with heart failure due to cardiomyopathy (a problem with the muscle of the heart). This condition occurs in 1.2-1.4 children per 100,000, and is 8 to 12 times more common in the first year of life than the subsequent years. The prognosis is very poor. However, it is theoretically possible for a patient's own heart to recover if he or she lives long enough for this to occur. Other options, such as mechanical hearts suitable for use in children, are currently being developed.

Hannah was brought to Harefield Hospital, UK (now part of the Royal Brompton & Harefield NHS Foundation Trust), in 1994. She had symptoms of severe heart failure secondary to cardiomyopathy. At age 2 years (in 1995) Hannah underwent a heart transplant, in which the donor heart was grafted onto, and took over much of the function of, her own heart. The new heart was inserted and functioned in parallel to Hannah's own heart.

The healthy, implanted heart assisted in pumping blood, which meant that Hannah's own heart could "rest" and gradually recover. However, as with all transplants of donor organs, the recipient's immune system must be suppressed using drugs to prevent rejection of the donated organ. Immunosuppression causes a very large increase in the incidence of malignant disease, particularly a type of cancer called Epstein-Barr-virus-associated post-transplant lymphoproliferative disorder (EBV PTLD). EBV is the virus which causes glandular fever in healthy individuals.

Some four and a half years after the transplant, both the donor heart and Hannah's own heart were functioning normally. However at this stage, removal of the donor heart--a major operation--was not deemed necessary. However, Hannah continued to have episodes of EBV PTLD, which by age 8 years had begun to spread and become extremely serious. Chemotherapy and multiple courses of drugs were used to get the EBV PTLD into complete remission. However, in January 2003, she developed symptoms suggesting that PTLD had recurred, and she went through similar drug cycles to treat it. This continued for two more years.
1(current)
2