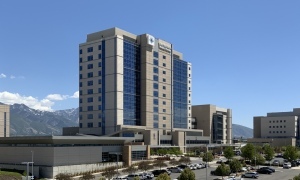 Rebranding as Intermountain Healthcare, the two are now a $14 billion health system that caters to patients and communities in Utah, Idaho, Nevada, Colorado, Montana, Wyoming and Kansas. With 33 hospitals, including a virtual one, and 385 clinics, it employs 59,000 caregivers. Additionally, it provides health insurance to one million patients in Utah and Idaho.

Announced in September 2021, the deal makes Intermountain the eleventh largest nonprofit health system in the U.S. “With this merger, we’ll create a model for the future of healthcare that focuses on keeping people healthy and proactively addresses causes of illness through high-quality, affordable and accessible care to more patients," said Intermountain Healthcare president and CEO Dr. Marc Harrison in a statement.

The new health system will be headquartered in Salt Lake City and have regional offices in Broomfield, Colorado, and Las Vegas. Harrison will lead it, while Lydia Jumonville will serve as the executive sponsor and lead the integration of the two systems. She will also serve on the new Intermountain Board, alongside Mike Leavitt as board chair.

Former Intermountain Healthcare Board Chair Gail Miller and former SCL Health Board Chair Michael Fordyce will also be members on the combined board, with Fordyce serving as board vice chair. Miller will also serve as chair of the new regional board in Salt Lake City, and Fordyce will hold the same position for the regional board in Broomfield. The enterprise leadership team will consist of personnel from both systems.

“Our work is well underway, and we are being very thoughtful about moving the best of our systems forward to continue providing the highest quality of care in the communities we serve,” said Jumonville. “We will advance our mission and better serve the entire region together.”

The combined system is expected to be an example for faith-based and secular healthcare systems alike. Intermountain brings its value-based care model and population health expertise, while SCL Health has experience running an integrated healthcare organization across multiple states and in competitive markets.

Intermountain also has a digital health platform and an extensive telehealth network. It previously planned to merge with Sanford Health into a system that was slated to operate 70 hospitals and 435 clinics across seven states. This controversial exit of Sanford Health's president and CEO, however, led the two to press pause on the deal and later cancel it. Intermountain also shut down 25 of its retail pharmacies last summer and transferred prescription and inventory to CVS Pharmacy. It now operates only a home delivery pharmacy, special pharmacy and its Primary Children’s Hospital retail pharmacy location.

SCL Health’s Catholic hospitals will retain their distinctive Catholic names and continue to operate according to existing practices. The same does not apply to its one secular hospital in Colorado.