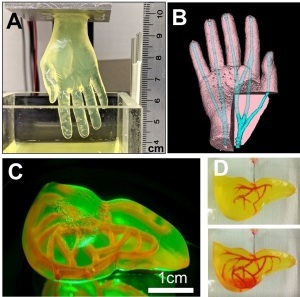 Stereolithography can produce 3D organs and tissue in minutes
Engineers at the University of Buffalo have 3D-printed a life-sized hand in minutes rather than six hours, like conventional methods.

Their method of choice was stereolithography, which they say produces 3D objects 10-50 times faster.

“Most of the 3D printing technologies we see today are extrusion and inkjet-based. To build a 3D object using these methods, you will need to first build a 2D planar layer in a pixel-by-pixel manner and then add multiple 2D layers to 3D. Our FLOAT technology is based on stereolithography printing, which deposits material through photo crosslinking of the resins in an entire 2D plane. So it is inherently faster than extrusion and inkjet-based methods,” co-lead author Ruogang Zhao, associate professor of biomedical engineering at the University of Buffalo, told HCB News.

For their study, the engineers utilized the fast hydrogel stereolithography printing (FLOAT) method, which improved the stereolithography by automating the printing in the z-direction. This allowed the 2D layers to be continuously added to form a 3D object, thereby making the process faster but still accurate, compared to conventional printing methods.


The jelly-like materials used to develop the hand are hydrogels, which are currently used to create diapers, contact lenses and scaffolds in tissue engineering. The latter application was applied by the engineers to 3D-print organs and tissues accurately and at a faster pace.

Stereolithography enables them to produce centimeter-sized hydrogel models quickly, while reducing deformation and cellular injuries that are common with conventional 3D printing methods, due to prolonged exposure to environmental stresses. It is also considered to be particularly effective for printing cells with embedded blood vessel networks, which is expected to play a critical role in the production of 3D-printed human tissue and organs.

Zhao and his colleagues have filed a provision patent for the technology and established a startup company to work on commercializing the technology.

“We also printed a prototype liver model that is capable of culture media perfusion and the long-term maintenance of liver cells,” said Zhao. “The enzyme production function of the liver model was demonstrated. Of course, this model is not yet mature enough for clinical use.”

Other study co-authors are from the VA Western New York Healthcare System, the Department of Cell Stress Biology at Roswell Park Comprehensive Cancer Center, and the Department of Biomedical and Chemical Engineering at Syracuse University.

The findings were published in the journal, Advanced Healthcare Materials.

How will the healthcare industry be different in a post-pandemic world?

Preparing O&P clinicians for the transition to 3D printing