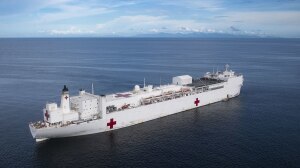 Now that all of the final dozen patients have been discharged from the 1,000-bed hospital ship USNS Comfort, mooring in New York, it may soon return to its Norfolk, Virginia home, according to a Navy spokesman.

The departure would signal “a sure sign of modest progress in mitigating the virus in the nation’s hardest-hit city and is a welcome sign,” USN spokesman Jonathan Hoffman told the Associated Press.

"Our goal all along has been to use them in New York as needed and then when the need no longer exists, to prepare them to the next location. We will be looking to FEMA to identify where that next location is," Hoffman added.

The ship, docked in New York since March 30, treated 182 patients, and discharged its last patient Sunday, according to UPI.

"We are proud and humbled to have assisted New York and New Jersey in this capacity," Lt. Marycate Walsh, a Navy spokesperson, told Fox News.

Both President Trump and Governor Andrew Cuomo have publicly approved of the move, and that the ship is no longer needed to treat the pandemic in New York.

"I’ve asked Andrew if we could bring the Comfort back to its base in Virginia so that we could have it for other locations, and he said we would be able to do that," Trump told reporters at last Tuesday's press briefing.

"We’ll be bringing the ship back at the earliest time, and we’ll get it ready for its next mission, which will, I’m sure, be a very important one also," he advised.

Cuomo was in agreement.

"It was very good to have in case we had overflow, but I said we don't really need the Comfort anymore," Cuomo told MSNBC anchorwoman Nicolle Wallace last week, according to Newsweek.

"It did give us comfort but we don't need it anymore, so if they need to deploy that somewhere else, they should take it," Cuomo said.

The risks to healthcare workers engaged in New York's battle against COVID-19 was highlighted when the New York State Nurses Association sued the state and two hospital organizations in the New York County Supreme Court, claiming that they had failed to give medical professionals adequate protective gear in “war zone” conditions — and required those workers who had caught the virus to come back to work sooner than recommended.

“More than seven in ten of our nurses are reporting exposure to COVID-19 and most are still untested,” NYSNA executive director Pat Kane said in a statement. “These lawsuits were filed to protect our nurses, our patients and our communities from grossly inadequate and negligent protections. We cannot allow these dangerous practices to continue.”

The New York Department of Health said in a statement that it is “deeply grateful” to, and “continues to take every step necessary to ensure that healthcare workers ... have the support and supplies needed to address this unprecedented public health emergency.”