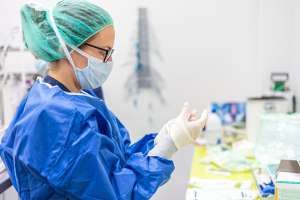 The 10,000 nurses, represented by National Nurses United, are demanding that HCA provide optimal personal protective equipment for nurses and other staff, such as N95 respirators or the more protective powered air purifying respirators, along with head-to-toe coverings. The protests, which took the form of actions that RNs would perform while at work, were planned for Wednesday and Thursday.

“Nurses at various HCA hospitals are reporting that they have had to work without proper protective equipment,” said Jean Ross, RN, president of National Nurses United. “Nurses say they are not informed when they are exposed to an infected patient. They are told to unsafely reuse masks and at one hospital they are even being told not to wear masks because it ‘scared the patients.’”

A national survey of nearly 10,000 RNs in every state and U.S. territory ranked HCA with the worst record of pandemic preparedness, with only 35% of its nurses reporting having access to N95 respirators on their units, compared to 52% at other facilities. Sixteen percent had access to PAPRs, compared to 23% of all nurses, and only 7% had enough PPE to protect staff and patients in the event of a surge in patients, compared to 19% of all nurses.

Among specific concerns raised by RNs are being told not to wear masks; delays in reporting exposure; being told to keep working after being notified of exposure; exposure to COVID-19 positive physicians; and exposure due to defective negative pressure rooms.

NNU asserts that HCA has accumulated more than $23 billion in profits over the last decade, enabling it to be able to afford PPE for its staff members.

As part of their protest, nurses will survey their RN colleagues on PPE preparedness as they report to work at shift changes. They will also mark checklist results on a large survey board as to whether their hospital has adequate PPE for RNs, proper isolation for infected patients, notifications for staff about COVID-19 cases, and adequate testing for staff.

“Protecting our patients is our highest priority, but it becomes much harder when we don’t have the safe protections, which puts us in danger of becoming infected,” said Angela Davis, an RN in the medical intensive care unit — a dedicated COVID-19 unit — at Research Medical Center Kansas City, Missouri, in a statement. “If we are no longer able to be at the bedside, who will be there to care for our patients?”

US hospital incorporates drone transportation as part of COVID-19 response