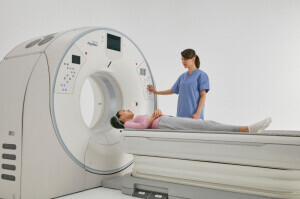 Though the technology has been around for more than a decade, spectral CT is starting to gain ground in the CT market. Many of the new releases over the last year tout spectral imaging capabilities, meant for cancer detection and cardiovascular applications.

At the same time, manufacturers are improving workflow and software companies are helping providers get critical reimbursements while lowering radiation dose.

At last year’s RSNA, the company released the Aquilion Prime SP, a 160-slice all-purpose CT scanner that can be used for advanced cardiac care. 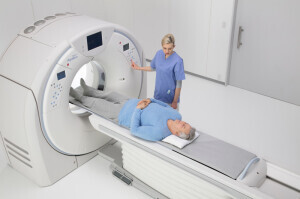 Canon Aquilion Prime SP
Last fall the company also released an updated version of its Aquilion ONE GENESIS, with a technology that improves image quality in brain scans and for cardiac imaging.

Smith said the changes were prompted by new guidelines for the management of patients with stroke from the American Heart Association and American Stroke Association, which recommended CT over MR when triaging such cases.

Aside from the buzz around the rise of spectral CT, a technology that has been around for the last decade, artificial intelligence is the next frontier for CT, and the company plans to release more information related to AI initiatives at this year’s RSNA.

“Our technology is built so that it’s AI ready,” Smith said. “AI is the next big trend that will impact all diagnostic imaging technology.”

CurveBeam
CurveBeam, which specializes in cone beam CT diagnostic imaging for the orthopedic market, received FDA clearance in May 2018 for its LineUP scanner, which provides weight-bearing imaging of the knee and lower extremities.
1(current)
2
3
4
5
6
7
8