This Month in Medical History – Thomas Edison and X-rays 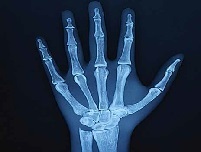 Thomas Edison was born on Feb. 11, 1847. Well-known as an inventor and an astute businessman and self-promoter, the Wizard of Menlo Park, as he was called, held more than 1,200 patents. He’s perhaps best-known for his work centering on the incandescent bulb, phonographs, the kinescope (an early type of movie camera) and bringing electric light to the masses. But he could also claim credit for designing and manufacturing the fluoroscope that served as the precursor to the designs still used today, although he was not comfortable with that association since it had an unpleasant back story.

That history is attached to a nearly unknown, but more relevant subject for this month’s history lesson. And as it happens, he also fits into the issue’s January/February timeline. Clarence Madison Dally was born on Jan. 9, 1865, in Woodbridge, N.J. One of four brothers, Dally enlisted in the Navy at 17 and served for six years. After leaving the Navy, he joined his father and brothers who were working as glassblowers at the Edison Glassworks. After about a year, he went to work at the Edison Laboratory, first on incandescent lamps, and then, ultimately, on the Edison X-ray Focus Tube. It was the latter invention that would prove his undoing. Edison, like the rest of the world, was astounded when he first saw the most famous X-ray ever — the image of Wilhelm Röntgen’s wife’s hand, which showed the bones, of course, and her wedding ring. Never one to pass up an opportunity, Edison conducted a series of experiments using his own mix of chemicals. Ultimately, he settled on using calcium tungstate, which created much sharper images than Röntgen’s barium platinocyanide.

The new fluoroscope was taken to the National Electric Light Association in May 1896. Attendees were entertained with free X-rays, each standing in front of the fluorescent screen and then using the scope to see their bones. Both Edison and Dally continued their work to refine the fluoroscope, with Dally the more enthusiastic participant, subjecting himself to countless hours of high radiation.

By the age of 35, the radiation took its toll and Dally had the dubious honor of being probably the first person to suffer from radiation poisoning. His hair fell out, followed by his eyebrows and eyelashes. The skin on his face lost its elasticity and his left hand became swollen and painful, so he switched to using his right hand for the experiments. When his right hand became too painful, he took time off from work to recover. Within two years, a lesion on his left wrist worsened to the point that the hand ultimately had to be amputated. Meanwhile, he also had all the fingers of his right hand removed due to an ulceration on that limb.

The amputations didn’t catch the carcinoma and both arms were eventually amputated, first at the elbows and then at the shoulders. Edison, to his credit, kept Dally on his payroll even though the younger man, who had a wife and two sons, could no longer work. Dally died in 1904 from the effects of radiation poisoning. And Edison, oft-quoted as saying, “Genius is 1 percent inspiration and 99 percent perspiration,” added a lesser known quote when speaking with a reporter from the New York World after abandoning his X-ray research in 1903. Edison would be quoted as saying, “Don’t talk to me about X-rays. I am afraid of them.”