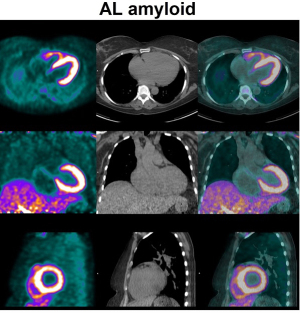 PET scan of cardiac amyloidosis
An Australian team of researchers has put an existing Alzheimer's radiotracer to work detecting amyloidosis, a heart problem that, once diagnosed through traditional biopsy, can mean a poor prognosis for patients.

"The study was conceived at a time when amyloid radiotracers...had been introduced for detecting amyloid plaques in the brain of Alzheimer's patients," W. Phillip Law, corresponding author and Radiologist, and Nuclear Medicine Specialist at Princess Alexandra Hospital in Brisbane, told HCB News. "We were curious whether it would be just as effective in the identification of amyloid deposition in heart muscle, as this could potentially be a very useful investigation for the many amyloid patients we see at our hospital."

The Princess Alexandra Hospital in Brisbane, Australia, is a major tertiary referral center and university-affiliated hospital with an amyloidosis clinic that provides integrated clinical care for the majority of patients with amyloidosis or suspected amyloidosis in the state. The study was just published in this month's issue of The Journal of Nuclear Medicine.

According to Law, the study was unique in that it included symptomatic patients rather than just normal subjects without heart problems. The condition – amyloidosis, which leads to dysfunction of the heart – is caused by calcium build-up in the heart. Median survival rates can be less than six months in untreated patients with certain types of amyloidosis. In yet other patients the condition can involve other organs, with the heart most at risk.

"Cardiac amyloidosis is notoriously difficult to diagnose because the first signs and symptoms of the disease are nonspecific and usually attributed to other conditions, resulting in delayed diagnosis and late introduction of appropriate treatment," said Law. "With considerable progress being made in the treatment of amyloidosis, which will hopefully improve survival from the disease, early diagnosis has never been more important."

He added that the radiotracer fluorine-18 (F-18)-florbetaben used in the PET study appeared to be very promising in identifying the heart condition. But he described the findings as "preliminary" based on a small number of patients (14). Law said the findings need to be validated in a larger group of test subjects with different types of amyloid and non-amyloid heart disease.

"If shown to be just as useful in larger cohorts and for differentiating amyloid from other cardiac disorders, florbetaben PET could become a convenient, noninvasive test for diagnosing amyloid involvement of the heart," Law said.

He also noted that if the evidence continues to support the viability of this PET screening protocol, it could minimize or eliminate the need for invasive biopsy procedures. This, in turn, would reduce potential complications and cost of the procedures, reducing health care costs. The procedure might also simplify the diagnostic algorithm for cardiac amyloidosis.