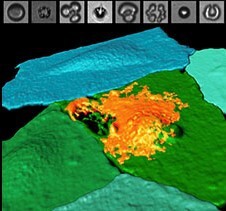 Courtesy of UPMC
A new tool to treat cardiovascular disease and cancer is in development at the University of Pittsburgh Medical Center (UPMC). Known as sonoporation, the noninvasive procedure combines ultrasound energy and microbubbles to poke holes in cells to deliver gene therapy.

"Microbubble contrast agent is currently a safe, diagnostic tool that is used to enhance echo contrast in echocardiography applications," Brandon Helfield, Ph.D., lead author of the study and a postdoctoral fellow at the Center for Ultrasound Molecular Imaging and Therapeutics at UPMC told HCB News.

According to Helfield the ultrasound-microbubble-based approach can be developed as a safe, noninvasive and direct therapeutic delivery platform. Among the diseases they are targeting for the protocol are cardiovascular diseases for which genetic targets have been identified, including ischemia, heart failure, cardiac hypertrophy and vascular stenosis.

The UPMC research was recently reported in Proceeding of the National Academy of Sciences .

Current approaches to gene therapy often use viruses to gain access inside cells, which can cause severe side effects, including inflammatory immune system reactions. To address this, researchers have developed gene-loaded intravascular microbubbles that can be targeted to release their payloads by direct navigation of focused ultrasound energy.

The Pitt researchers developed an ultrafast imaging camera capable of reaching speeds of up to 25 million frames per second to record the procedure. Other imaging modalities are also key in the research.

"Ultrasound is essential to this process, as it is the driving force that initiates bubble vibrations which, in turn, generate the pores. Without ultrasound, the bubbles are innocuous," said Helfield. "Following up with state-of-the-art fluorescence imaging to visualize the membranes of cells, we examined the consequences of sonoporation on neighboring cells."

The UPMC researchers believe the findings will help them understand how the process of sonoporation works, as well as how experts can tailor the approach.

"We can tailor this approach toward its eventual clinical application as a non-viral, localized gene delivery platform for the treatment of cardiovascular disease and cancer," said Helfield.