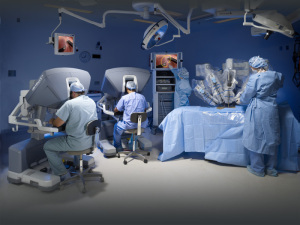 “Minimally invasive surgery has been shown in many areas of general and bariatric surgery to be beneficial for recovery and decreasing post-operative complications,” Dr. Anthony Gonzalez, lead author and Chief of Surgery at Baptist Hospital of Miami told HCB News. “In addition, there would be elimination of the wound complications that occur with open hernia repair.”

The study, published in the most recent issue of Surgical Endoscopy, involved 368 patients between 2011 to 2015. Less than one percent of cases required conversion to the open incision protocol. The average age was 51 years with about 60 percent of patients female.

According to Gonzalez, minimally invasive surgery, such as that provided with robotic assist, decreases post-op complications and aids recovery – especially in bariatric patients. Nearly 70 percent of the study patients were obese or morbidly obese, which tends to make surgery riskier and more complicated.

About 75 percent of patients were discharged the same day of surgery, with the balance discharged after a day. Gonzalez said that robotic surgery benefits patients through lower costs.

“Decreasing length of stay, and complications translates to savings in health care expenditures,” he said. “On average, each robotic procedure creates a savings of $2,000.”

Gonzalez said that because the da Vinci is already approved for general surgery, additional FDA approval is not required for hernia repair use. He also noted that long-term outcomes are needed to determine reoccurrence rates for the robotic-assisted hernia repair option.

Open surgery is still the standard for repairing hernias. A review of the American College of Surgeon’s National Surgical Quality Improvement Program database shows that of the 26,766 primary/incisional hernia repairs performed between 2009 and 2010, 72 percent were open repairs, compared to 28 percent done with a laparoscopic approach.