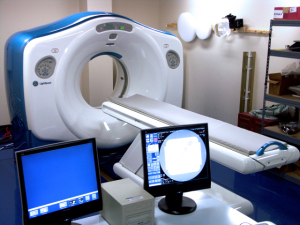 A sluggish economy and health care reform have driven more hospitals to use existing CT systems, or find low-cost replacements.

But while refurbished CT equipment sales seem to be escalating, demand is still flat across the board, according to Charles Gauthier, general manager of Imaging Services, an independent service provider located in Streamwood, Ill.

“This year, we have seen an uptick in refurbishment as an alternative to new CT equipment, compared to the last two years,” he says. “But sales are still not what they were [before the economic downturn].”

Industry experts agree that both new and refurbished 16-slice CT scanners have been 2011’s hottest commodity.

“80 percent of customers want 16-slice,” says Randal Walker, VP of sales for Genesis Medical Imaging, an independent service provider in Huntley, Ill. “It makes sense when you look at the way Medicare Episode Risk Groups are set up. For reimbursement rates, that is truly the sweet spot.”

Many buyers are focusing on exactly what they need to get the job done, and a 16-slice provides just that, according to Chad Book, regional sales executive for C&G Technologies, a CT scanner equipment and service provider in Jeffersonville, Ind.

“This sometimes means [buyers] will back away from higher dollar systems such as a 64-slice scanner,” he adds.

Demand has been highest for refurbished GE LightSpeed 16 CT scanners, due to parts and services being readily available nationally and internationally, according to Walker. Meanwhile, in his experience, Siemens 64-slice CT scanners have been the least in demand, on account of the Siemens Stratton CT Tube costing $250,000, he said.

“And no one is going to make a replacement [for the Siemens Stratton CT Tube] anytime soon,” adds Walker.

In the refurbished CT industry, above 64-slice is still relatively uncommon, according to Book.

“This is due to the lack of scanners at that level on the market,” he says, adding that he expects more 64-slice CT scanners to come online shortly.

Among new CT technologies that have yet to be sold as refurbished is Siemens' Somatom Definition Flash, a Dual Source CT system. CT 2011: Focused on Dose, a report published in December by research firm KLAS, also found that Siemens’ system was end-users’ top pick for dose-lowering capability as well as overall performance. But while demand for this equipment new was initially high, Walker says he would be “shocked” if anyone bought or sold it as refurbished.

“You can only get maintenance from Siemens and the cost is more than $45,000 over a GE LightSpeed VCT 64 per year for maintenance,” says Walker.

Looking forward, Walker predicts Toshiba’s CT equipment is going to have a significant presence in the refurbished CT market in 2012. He notes that between 2005 and 2010, Toshiba owned the CT market, so the first wave of the company’s equipment will begin to come off the five-year lease or purchase cycle.

“The nice thing about where we are sitting is we don’t ever look out the front window to see where we are going – we look at the rearview mirror,” Walker adds.

Although he notes that health care reform will take several years to roll out, resulting in continued “ambiguity and uncertainty” for the CT market’s refurbishment side, Gauthier is optimistic about the future.

“We see [refurbished CT equipment] as an increasing option or alternative for customers that need to refresh their equipment, but need to maintain their cash or capital reserves,” he says.

The international market is also seeing a growing demand for refurbished CT, according to Book.

“There is no reason to expect that to slow down,” he adds.