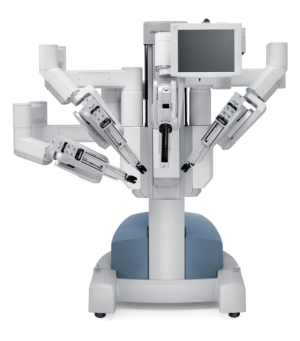 "This is a big step forward for surgery and a tremendous advantage for the patient," said Dr. Madi, an oncologist with a focus on the kidney and prostate, and special training in minimally invasive and robotic techniques.

"Having both procedures done this way minimized surgical risks, the use of anesthesia, patient recovery time, pain and the patient's financial burden," Madi said.

The patient was referred to Madi after being diagnosed with prostate cancer. A follow-up CT scan revealed his kidney cancer. During a visit with the patient a week after surgery, he said he was amazed by the robotic procedure.

Removal of the kidney and the prostate traditionally has been done using much longer incisions, which are more painful and heal more slowly. What's more, before now, each procedure would have been done separately, probably several weeks apart, further delaying the patient's return to normal activities.

"Recovery time for both big surgeries would have taken at least eight weeks," Dr. Madi said.

He noted that the patient was selected for the procedure due to his relatively young age of 46, and overall good health, since the operation was intensive. The robotic time for removing the kidney was 1 hour and 40 minutes, and removing the prostate took 2 hours and 20 minutes.

The patient spent just three days in the hospital after surgery and has been cleared to return to work next week.

This is the first time one surgeon has removed both the kidney and the prostate. The procedure was also performed recently at the Vattikuti Urology Institute at Henry Ford Hospital in Michigan, which is renowned for its use of robotic surgery. In that case, while the cancerous organs were removed through the same incision, two surgeons were involved, one removing the prostate and the other physician removing part of the patient's kidney.