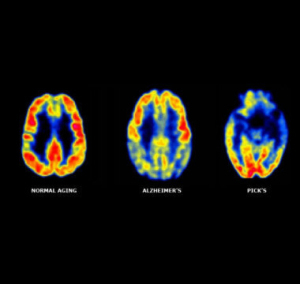 Frontal lobe dementia
University of Antwerp researchers have developed a blood test that can predict whether a patient will develop frontal lobe dementia (FTD), long before symptoms occur, based on the amount of progranulin in the bloodstream.

Unlike Alzheimer's disease, FTD frequently strikes people younger than 65. In FTD, the disease process starts in the frontal lobe where large numbers of brain cells begin to die off. Like Alzheimer's, FTD is responsible for a lack of cognitive functions such as language, behavior and personality and later in the disease process, the loss of memory.

Researcher Christine Van Broeckhoven and her colleagues found that a large percentage of people who have FTD have a genetic defect in chromosome 17 and that the defect causes them to produce only half the normal amount of a progranulin protein. Additional results indicate that a lack of progranulin also plays a role in Alzheimer's disease and Amyotrophic Lateral Sclerosis (ALS).

Krisel Sleegers, one of Van Broeckhoven's researchers, has developed a test to measure the amount of progranulin in the blood. The test, which is simple, will help doctors determine if someone is at risk of developing FTD long before symptoms appear.