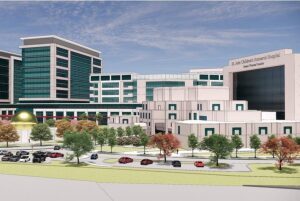 This brings the plan's total investment to $12.9 billion, which will go toward both construction and new jobs, now raised by 1,400 to 2,300 by 2027, according to the institution.

The latest increase will target $2.3 billion for building, renovation and capital needs, up from $1.9 billion.

The plan is doubling down on current funding, with another $250 million, in areas including structural biology, advanced microscopy and data sciences, in an ongoing effort to pinpoint how diseases start, spread and resist treatment modalities. The increases, Downing advised, should let the hospital “capitalize on emerging technologies and discoveries.”

The $35 million investment in a program looking at the structure of cell-function-regulating protein kinases will get $15 million more over the next six years. These protein kinases appear to play key roles in pediatric cancers and drug resistance — and unlocking how they work could lead to new precision therapies, according to the hospital statement.

While U.S. cure rates are as great as 80% for such childhood cancers, in lower-income countries cures may be under 20%. To address this challenge, the expansion plan is aiming to invest $100 million a year by 2024 — above the $200 million already committed in the plan last year — to boost St. Jude global networks, and for training of cancer-focused healthcare professionals internationally.

Already, St. Jude has supported, with $100 million, five teams of researchers focused on fundamental biology, pediatric cancer, sickle cell disease and survivorship. That funding will see a $60 million increase with the newly expanded plan, with a goal of supporting 11 such collaborations by 2027.

“One of our goals of the strategic plan is to cure the incurable cancers, those cancers where, over the last several decades, we really haven't made progress and the outlook is still very poor for patients,” Downing told the Memphis Commercial Appeal.

When the plan was announced in 2021, it called for a number of investments, including creation of a Cryo-Electron Tomography Center and a Center of Excellence in Advanced Microscopy, according to a report at the time.

Beyond the new funds expanding research and treatment, additional investments will also be made at the hospital's campus, including in the 140-unit Domino’s Village to house patients and families and the treatment-free zone Family Commons. In addition, $1 billion will go toward construction of a pair of 15-story buildings for patient care and clinical research.

The bulk of these funds comes from donations. “The largest financial investment in the 60-year history of St. Jude is thanks to the 12 million donors who support its lifesaving mission,” said Richard C. Shadyac Jr., president and CEO of ALSAC, the fundraising and awareness organization for St. Jude.