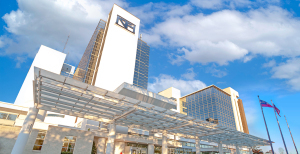 Scheduled to be completed by 2025, both structures will help the hospital accommodate more patients in Gwinnett county, the second most populous region in Georgia. The tower will add 132 new beds for a total of 520, while the 143,828 square-foot office building will be used for outpatient imaging, ambulatory surgery and several physician practices.

The project will add cardiovascular, neurology and orthopedic care services to the hospital, according to The Atlanta Journal-Constitution.

“To be a partner with the county, we have to build the infrastructure, to make sure that the patients can be treated here and not have to leave the county for healthcare,” Debbie Mitcham, the CEO and president of Northside Hospital Gwinnett and Northside Hospital Duluth, told The AJC.

In addition to population growth, the pandemic also motivated the expansion, said Jay Dennard, the chief operating officer of Northside Hospital Duluth and the vice president of physician services for the Northside Hospital Gwinnett system. “As we’ve seen the inpatient hospitalizations from COVID decline, we’ve still needed to add beds, because we’re expanding key services in the community as well,” he told The AJC.

The addition of approximately 5,000 new jobs will help the area’s economic development, say officials, who hope the new buildings will lead to other developmental projects. The tower will also feature a new patient entry lobby and outpatient waiting areas.

Northside Hospital Gwinnett is part of the Northside Hospital network, which became the first to be fined by CMS for failing to adhere to the hospital price transparency rule, which went into effect in January 2021. Under it, providers must list prices for certain services to help patients better shop for the most affordable care based on their medical needs.

Northside Hospital Atlanta owes $883,180 for not clearly identifying its location in the searchable list, while Northside Hospital Cherokee will pay $214,320 for not having a consumer-friendly list of standard charges. The combined fine is worth more than $1 million.