Portable MR may play a lifesaving role in stroke treatment 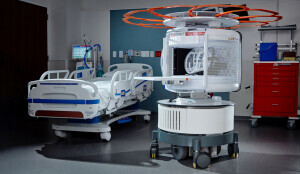 Portable MR may provide life-saving information about strokes
A lack of available imaging scanners in hospitals can dramatically raise risks and complications associated with stroke. This is because doctors are deprived of lifesaving information, such as if the stroke is an intracranial hemorrhage that requires surgery.

Researchers at Yale School of Medicine say a potential solution in the future may be portable MR, based on a study they performed with Hyperfine’s portable point-of-care MR system.

Known as Swoop, the solution is equipped with a 0.64 magnet and is 20 times cheaper, 10 times lighter and consumes 35 times less power than fixed conventional MR solutions, according to Hyperfine. The scanner, which received FDA clearance in December 2020, was designed to bring MR to parts of the world lacking access, as well as fragile patients who cannot move from the bedside.

“There is no question this device can help save lives in resource-limited settings, such as rural hospitals or developing countries,” said Kevin Sheth, professor of neurology and neurosurgery at Yale School of Medicine and co-corresponding author of the research, in a statement.

Sheth and his colleagues say it can be wheeled down a hallway and used almost anywhere by medical technicians with little training. Together with Massachusetts General Hospital, they compared scans of 144 patients assessed with Swoop and results generated from traditional neuroimaging modalities. Swoop was used specifically to scan brain injuries in patients at their bedside.

The neuroradiologists were able to identify 80% of intracerebral hemorrhages in images acquired with Swoop, making the study the first to validate the ability of portable MR for showing the clinical issues and risks of a brain hemorrhage, according to the authors.

The solution was previously used in a preliminary, two-year study to assess 123 patients with known, acute neuropathology, as well as hemorrhages, ischemic stroke, hematomas, tumors, edema, and hydrocephalus. Of this, 85 were stroke patients who received treatment within seven days of the onset of their symptoms following their scans with Swoop. The findings showed that portable, low-field MR imaging can be used safely and practically to acquire brain images at a patient’s bedside.

Hyperfine recently racked up $90 million in an oversubscribed Series D financing round that went toward the commercialization of its platform and went public following a merger with Liminal Sciences and HealthCor Catalio Acquisition Corp. into one company with a total enterprise value of approximately $580 million.

Sheth and his team are currently testing its potential for diagnosing and monitoring head trauma and brain tumors, and for assessing brain health in patients with risk factors such as high blood pressure.

The findings for their study were published in the journal, Nature.