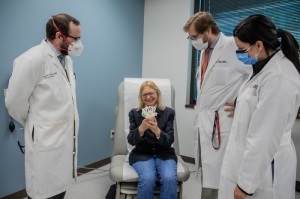 Performed on 63-year-old Karyn Russell at UC Medical Center, the procedure bears its name from the replacement of the aortic and mitral valve and repairing of the tricuspid valve. The least invasive surgical procedure possible, it can help patients avoid open heart surgery as well as the risk of damage to bones.

Instead, surgeons simply make a small incision into the skin and operate on all three valves from there, according to UC Health cardiac surgeon Dr. Tommaso Hinna Danesi, who became an associate professor of surgery at the University of Cincinnati College of Medicine in Spring 2021 and performed the surgery on Russell.

"UC Health staff began training several months before my arrival. Once I knew I was coming to UC, I started to write a handbook about endoscopic cardiac surgery in which I gave tips and tricks for all the individuals involved in the OR, from the scrub nurse to the perfusionist to the surgical assistant and so on. The CTS staff worked hard, and in just a few months were able to perform this complex surgery," he told HCB News.

The sparing of the sternum and miniaturized incision site spares the patient the pain of open-heart surgery and results in a shorter hospital stay and faster recovery, according to Danesi. He says that endoscopic triple valve surgery reduces procedure time by 50% and results in fewer side effects, compared to open-heart surgery. Russell, for instance, was out of the hospital in less than a week following surgery and was cleared just one month later to travel to Chicago on a family trip and gorge herself on Chicago-style pizza.

Her quick discharge was because doctors did not have to cut into the bone and the risks were reduced because they did not have to stop the heart. To prepare for the operation, the surgeons worked with Dr. Frank Rybicki, UC Health vice chair of radiology and professor at the UC College of Medicine. Rybicki designed a state-of-the-art 3D map of Russell’s heart and valves. With it, Danesi and his team were able to prepare in advance.

"To my knowledge there is not a minimally invasive and endoscopic teaching program across the universities," said Danesi. "My hope and my wish are that endoscopic cardiac surgery may become the standard of care for patients suffering valvular disease and heart failure, because being gentle and less invasive with their body results in faster recovery and better quality of life."
1(current)
2