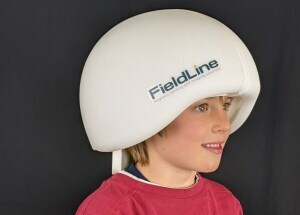 The HEDscan system creates 3D videos of a subject’s brain activity that allow clinicians to better understand neurological conditions like PTSD and Alzheimer’s.

"Traditional MEG technology uses a rigid helmet that places the sensors far from the scalp (25 mm or more) due to the requirement for liquid helium cooling. Our sensor technology is called Optically Pumped Magnetometer (OPM) and since it does not require cryogenic cooling, the sensors can be placed in direct contact with the scalp. This increase in proximity has shown an ability to read deeper sources and an increase in signal-to-noise by a factor of 5 to 10 over previous MEG devices," Jeramy Hughes, co-founder of FieldLine, told HCB News.

MEG is a noninvasive brain imaging method that directly detects tiny changes in magnetic fields produced by neuronal currents. It is designed with high speed and high spatial resolution to report accurate results quicker than other brain imaging technologies, such as functional MR and EEG.

The HEDscan system consists of a lightweight cap and utilizes 128 fully synchronized quantum magnetic sensors, which are constructed with the company’s proprietary microfabrication techniques. The lightweight cap enables subjects to move freely when measured and can fit a variety of head sizes. This, according to Hughes, can be helpful to patients with tremors or children who have trouble sitting still.

The non-cryogenic nature of the system allows for its sensors to be in direct contact with the scalp, which gives better SNR and the ability to measure deeper sources. They also enable hospital environments that house the system to be much smaller and not require building modifications or extra infrastructure. Maintenance procedures and costs are also reduced since weekly liquid helium filling is not required.

The solution has been reported in recent studies to improve signal-to-noise ratio better than prior MEG technologies. The technology’s non-cryogenic sensors and compact size are expected to advance the field of MEG, according to FieldLine. "The first application area is likely to be in the field of epilepsy diagnostics and treatment. Additionally there has been a recent surge of interest in using MEG for other areas like TBI, Alzheimers, PTSD, and more," said Hughes.

The company will also sell portable magnetic shielding along with the device, caps, and user software.