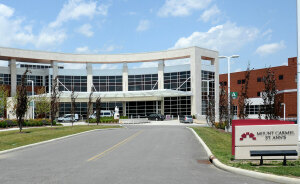 Miles Jackson was taken to Mount Carmel St. Ann’s Hospital emergency room in Westerville after he was found passed out in his car. While being transferred to Columbus police for domestic violence warrants and a weapons under disability warrant, an officer found something hidden in his shorts and instructed another officer to help get Jackson’s hands behind his back, according to NBC4 WCMH-TV.

Body camera footage showed a struggle ensued, with Jackson tased twice and the gun in his shorts going off. Armed officers gathered outside his room while one was inside and told him to put down the gun and put his hands above his head several times. Jackson, who was down on the ground at this point, said he was leaning on his gun. A series of shots were eventually fired, with Jackson carried from the room for medical attention. Body camera footage captured a bloody gun left behind.

"Security is a fixture within the emergency department, and we have full-time security presence in our ED at all times,” a Mt. Carmel spokesperson told ABC 6/FOX 28.

Westerville police have launched an investigation into the incident, with officers Eric Everhart and David Lammert put on administrative leave until its completion. The Columbus Division of Police confirmed that Andrew Howe and Ryan Krichbaum were their officers present.

“It is not customary to publicly report on personnel matters, but we are committed to transparency and fully understand the attention to this incident,” said Westerville Chief Charles Chandler in a statement.

The incident sparked a protest Tuesday night outside Columbus Police headquarters. Police told ABC 6 that protesters attempted to break into the headquarters and at least one pepper-sprayed officers. A 20-year-old man was also arrested for allegedly striking an officer with a wooden club. The protesters said they were not being violent and were seeking to get in to ask questions.

Jackson’s girlfriend, Jazmine Washington, with whom he shared three kids, told ABC 6 that he “loved his kids and me as his kid's mother a lot, and you know he just really was crying out for help. People make mistakes, but I just feel like this wasn't... It wasn't right.”

The investigation is expected to take an average of 400 hours, according to Ohio Attorney General David Yost. “We will find the truth, and we will fully reveal it.”