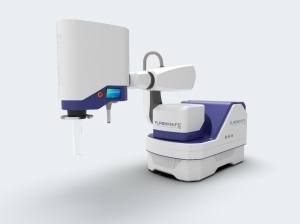 FLASHKNiFE
PMB, a subsidiary of the ALCEN Group, has launched FLASHKNiFE, a FLASH radiotherapy system developed for clinical trials.

A supplier of medical machines, PMB-Alcen designs radioactive tracer production solutions for medical imaging as well as radiotherapy systems. Its latest solution through PMB, FLASHKNiFE, will be used to administer a high single dose of radiation to test clinical applications such as skin cancer treatment and intraoperative radiotherapy.

"We are currently working with surgeons in head and neck, visceral and gynecology," Philippe Liger, Radiotherapy Product manager at PMB-Alcen, told HCB News. "Other clinical applications could include superficial lesions, for instance in dermatology. These indications cover a vast field, from superficial nodes in the case of external treatment, to the pancreas, the ovaries and other parts of the body."

"We have been working with the pioneers of this fascinating subject, Lausanne University Hospital, for several years now,” said PMB CEO M. Marc Delmas in a statement. “We believe that FLASHKNiFE is a breakthrough device in the field and the right tool to develop clinical applications and go on writing the history of FLASH radiotherapy."

FLASH is an advanced form of radiotherapy in which large doses of radiation are delivered in a fraction of a second. First developed in France in 2014, demonstrations and studies of the technique have popped up across the U.S. and Europe, with the aim being to adapt the practice for clinical use and improve the speed and safety of radiotherapy.

FLASHKNiFE consists of an ultra-high dose rate LINAC mounted on a mobile base, and combines usability, flexibility and FLASH delivery mode with precise configuration and monitoring. It was developed based on findings made with the Oriatron 6e, a prototype LINAC engineered to accelerate electrons in FLASH mode.

The prototype was installed in 2013 at Lausanne University Hospital (CHUV) where it was used to conduct preclinical tests on several animal species, such as zebrafish, mice, cats and pigs. It also showed efficiency in sparing normal healthy tissue, and maintained the same effects on tumors among all tumor models tested.

CHUV used the Oriatron 6e to perform FLASH therapy on the first patient in 2019 for treatment of a skin refractory lymphoma. The dose monitoring system was credited with the first attempt being feasible and safe.

Whereas the Oriatron 6e's energy level is 7 MeV, FLASHKNiFE holds one of 10 MeV, allowing it to increase and improve penetration to treat the deepest tumors. It also has a positioner that enables it to orient and position the beam source in relation to the patient, whereas the Oriatron 6e is fixed.

Liger and his colleagues plan to obtain a CE mark for FLASHKNiFE as a medical device, which requires specific performances, such as precise dose administration, monitoring and safety aspects.

"More systems will be developed for various applications, which is great news for cancer research," said Liger. "It could probably also make intraoperative radiotherapy (IORT) more widely used, which isn't the case today. For example, in France, radio-oncologists are not used to working with surgeons, nor treating patients together. We also will soon begin clinical trials for CE marking to reach the European market. At a later stage, the aim is to answer the requirements of the FDA and reach the North American market. In the future, our goal is for FLASHKNiFE to be used in clinical practice."

PMB plans to soon install a first clinical prototype of FLASHKNiFE at the CHUV.