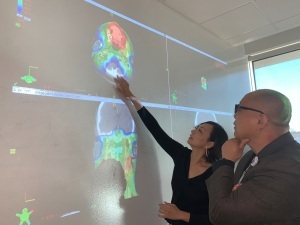 Using enhanced deep-learning models, researchers at UT Southwestern were able to develop treatment plans in which dose was tailored to individual patients, in a fraction of a second. The models processed complex clinical data to make their determinations.

“At this moment the primary focus is on efficiency,” Steve Jiang, director of UT Southwestern’s Medical Artificial Intelligence and Automation (MAIA) Lab, told HCB News. “Our ambitious goal is ‘zero wait time’. Personalization in radiotherapy is an ongoing project as well.”

Patients often wait several days to a week to begin therapy as doctors sift through imaging data and several phases of feedback with their medical team to manually develop treatment plans. Delay of treatment by even a week risks increasing the chances for recurrence or spread of cancer by 12-14 percent, according to MAIA.

The team at UT Southwestern, in a study, was able to produce optimal treatment plans within five-hundredths of a second upon receiving clinical data for a patient, from initial dosage required before treatment began to recalculations throughout progression of the plan. Data for 70 patients with prostate cancer was fed to four deep-learning models, which learned through repetition to develop 3D renderings that showed how best to distribute radiation to each patient. Each model accurately predicted the treatment plans manually developed by the medical team.

As a patient’s anatomy is subject to change throughout therapy, dose recalculation is conducted prior to each session. The task requires the patient to wait 10 minutes or more as dose is calibrated, as well as additional time to conduct anatomy imaging.

Jiang and his colleagues tackled this issue in a second study, in which they developed an AI algorithm that accurately recalculated dose before each session, taking into account changes in a patient’s anatomy since last receiving therapy. The algorithm was formed from the merging of a simple, fast model for dose calculation that lacks accuracy, and a complex one that was accurate but often required about a half-hour to determine appropriate dosage. Using the data from the 70 prostate cancer patients, the algorithm assessed the differences between the models and generated accurate calculations within one second.

The next step is to implement a patient interface, in which the AI tool will be applied alongside clinical software systems used for cancer radiotherapy.

“Basically we need to implement our AI tool in the clinical software ecosystem,” said Jiang. “We envision we will begin to use this AI tool in clinical care in about 3-6 months. We are also working on other tumor sites as well, such as head and neck cancers.

The studies build upon 2019 MAIA research that focused on developing treatment plans for lung and head and neck cancer.

The findings of both studies were published in Medical Physics.