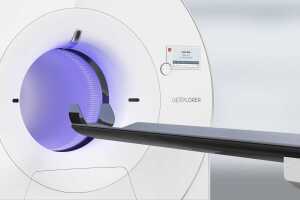 Researchers at the University of California, Davis and Fudan University in Shanghai utilized an advanced reconstruction method to capture movement in real time of a tracer within the human body of a volunteer who underwent scanning on the EXPLORER PET/CT total body scanner, commercially known as uEXPLORER. This visualization of such a process is expected to provide insights that may lead to the ability to observe the function of multiple organs, such as the heart and brain, at the same time.

Being able to do so can provide insights on "diseases like peripheral arterial disease, which can affect distribution of blood to multiple parts of the body," Simon Cherry, co-leader of the EXPLORER Consortium and a professor of biomedical engineering at the University of California, Davis, told HCB News. He adds that "more generally it could be a great tool for assessing cardiovascular health by looking at the entire circulatory system of a patient."

The combination of CT and PET capabilities will enable clinicians to study the anatomy and the functioning relationship between tissues and organs within the body, with the scanner able to image a whole patient within 15 to 30 seconds. This saves a tremendous amount of time compared to conventional PET scanners which require 10 to 20 minutes as they image parts of the body, and reduces the chance of blurriness in images by requiring patients to only hold one breath during procedures.

Equipped with more than 560,000 detector elements and close to 54,000 light sensors and channels of electronics, uEXPLORER possesses 40 times greater sensitivity than current clinical PET/CT scanners, a quality that is expected to create longer lifespans for radiotracers and reduce the amount of dose needed.

The short-lived radioactive tracer is depicted as a black line that twists and turns as it makes its way from the lower leg up in the body to the heart. It then flows through the right ventricle to the lung, and then back through the left ventricle and through the rest of the body. The video also shows the motion of the heart in high quality, capturing changes in cardiac contraction with clear delineation of the end-systolic and end-diastolic phases.
1(current)
2