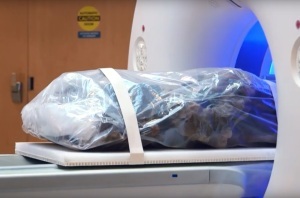 Heart disease is nothing new.

CT scans of five Inuit mummies from Greenland from 500 years ago showed that their very active lives and diets high in omega-3 fatty acids, did not, in fact, protect their hearts.

Researchers at the Heart and Vascular Center of the Brigham and Women’s Hospital, Boston, Massachusetts got permission to image the mummies from their present keepers, the Peabody Museum of Archaeology and Ethnology, and reported their findings in the JAMA Network.

“It’s always fascinating to look at humans who lived hundreds of years ago and see if learning about the past could teach us more about the present and future,” said Ron Blankstein, associate director of the Brigham’s Cardiovascular Imaging Program, director of cardiac computed tomography, and a preventive cardiology specialist. He was a member of the team of experts who scanned the mummies and interpreted the images, according to The Harvard Gazette.


The mummy group was made up of two young males and two females all estimated to be from 18 to 30 years old, and one infant.

Multidetector whole-body CT images at 80 and 120 kV with 6-mm slice thickness with 50 percent overlap, and reconstructed using multiple kernels with a Siemens third-generation dual-source CT scanner revealed that three of the four adults showed “evidence for the presence of calcified plaques” suggesting atherosclerosis.

“Three mummies had evidence of calcified atheroma, identified as discrete high-density regions in an arterial distribution,” reported the researchers, adding that, “incomplete visualization of the arterial vascular tree precluded accurate grading of the magnitude or severity of vascular calculation and evaluation of clinical disease. Nevertheless, the appearance of vascular calcification in these 3 mummies resembled previous observations of atherosclerosis in mummies and living humans.”

One possible factor in plaque buildup in these ancient peoples, advised the researchers, could be the use of indoor fires, which produce smoke that can also clog arteries.

This is not the first evidence for heart disease in mummies. In 2015, French archaeologists with the National Institute for Preventive Archaeological Research uncovered mummified hearts in five heart-shaped lead urns and found that three of the four hearts showed disease signs, such as plaque on coronary arteries. The fifth heart was not well enough preserved to be studied.
1(current)
2