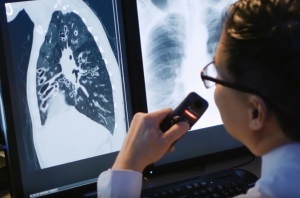 Nuance Communications, which launched the first AI marketplace for diagnostic imaging in 2017, has made updates to its popular PowerScribe One radiology reporting solution to include AI-assisted reporting and decision support and real-time data synchronization with third-party systems, integrating the AI into the radiology workflow.

The enhancements debuted at the RSNA annual meeting in Chicago earlier this month.

“We’ve continued work in AI to make those tools usable and useful,” Karen Holzberger, senior vice president and general manager of diagnostics for Nuance Communications, told HCB News. “Chapter One was the AI marketplace. We knew we had to make and develop tools in the radiologists’ workflow. It’s important, as the algorithms are analyzing the DICOM images, that we’re able to meaningfully insert those findings in the right place in the report, dynamically.”

Among other features, PowerScribe One, used by approximately 80 percent of U.S. radiologists, according to the company, now uses AI to enable clinical decision support for impressions and follow-up by highlighting relevant text in the radiologist's report.

The product has a new virtual assistant feature that allows the radiologist to use voice commands to access patient data from the PACS and EHR, bring up historical reports, control the monitor and send messages, among other tasks.

There is also real-time data synchronization between PowerScribe One, PACS, EHR and other connected platforms, from imaging vendors including Visage, Sectra, BARCO and Client Outlook, as well as the Siemens/Cerner PACS, announced previously.

In addition, AI results via the Nuance AI Marketplace are now directly integrated into the radiology visualization and reporting workflow.

PowerScribe One also uses AI to support the use of structured report terminology and CDE, a joint program between the RSNA and the American College of Radiology (ACR).

Other new features include an "ambient mode" that automatically converts free-form dictation into structured reports; a “dark mode” designed to reduce radiologist fatigue; Smart Assist, which automatically checks grammar and spelling; Quality Check, which automatically identifies laterality or sex mismatches and actionable findings; and a workspace that displays data and tools only when the radiologist needs them; and administrator dashboards that provide information on radiologist performance.