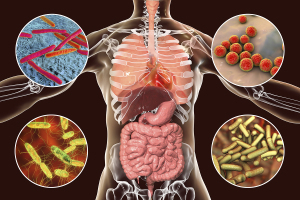 Patients admitted to hospitals are at higher risk
of developing infective endocarditis
Heart disease patients, or those implanted with defective or artificial heart valves may be at a higher risk of developing a potentially deadly cardiac infection, says a new study.

Researchers at Rutgers University report that new risk factors are leading to more cases of infective endocarditis, an infection of the heart valves, and that an increasing number of patients admitted to hospital for other diseases are at risk of contracting it.

“Hospitals are very concerned about healthcare-related infections, and constant monitoring is in place,” lead author Abel E. Moreyra, a professor of medicine at the Robert Wood Johnson Medical School at Rutgers, told HCB News. “If an infection occurs, treatments may go from intravenous antibiotics to removal of a device or even open-heart surgery to replace an infected valve.”

Infective endocarditis is typically caused by bacteria entering the bloodstream via the mouth, gastrointestinal or genitourinary tract. The American Heart Association initially recommended that all at risk for the infection take antibiotics until 2007, when it revised the recommendation for only those at high risk.

Researchers evaluated the impact of this policy change by assessing 21,443 records of New Jersey patients diagnosed with infective endocarditis between 1994 and 2015. They found that the number of patients given a primary diagnosis of the infection began decreasing in 2004, chalking it up to improvements in dental care and the modern-day rarity of rheumatic heart disease, where streptococcus plays a predominant role in the infection.

Secondary diagnoses, however, for those who developed the infection after entering hospital went up, due to staphylococcus bacteria, a different microorganism that is prevalent in hospitals and can be a possible source of infection. A total of 9,191 patients were hospitalized with infective endocarditis as the primary diagnosis, while 12,252 received secondary diagnoses.

“There are procedures that are considered predisposing factor for infectious endocarditis such as insertion of indwelling catheters, pacemakers, defibrillators, and hemodialysis,” said Moreyra. “There are no well-established guidelines in terms of antibiotics prophylaxis for these procedures. Therefore, meticulous sterile techniques must be used with these procedures to avoid staph infections. The use of vaccines against staph has been investigated.”

The findings were published in The American Journal of Cardiology.