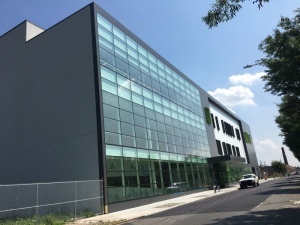 The $300 million, 140,000 square-foot New York Proton Center was ten years in the making, and will “deliver an unparalleled patient experience leveraging the most advanced proton technology available anywhere in the world,” CEO Allan Freeman said in a statement.

While there are 30 similar proton centers in the U.S., the New York facility is packed with the latest, most effective technology, including second-generation proton therapy with pencil beam scanning and volumetric imaging. There are 23 proton therapy-trained radiation oncologists on its staff.

The center is equipped with the Varian ProBeam system. “It has been an honor for Varian to collaborate with our long-term strategic partners in radiation oncology on the development and opening of the New York Proton Center,” Kolleen Kennedy, president, Proton Solutions and chief growth officer at Varian, said in a statement. “We look forward to expanding our close partnership in the fight against cancer, including research for innovative treatment paradigms such as Flash therapy.”

“With proton therapy, the normal tissue gets a lot less radiation, and patients are less likely to experience side effects and complications from radiation," Dr. Charles Simone, its chief medical officer, told Crain's New York, adding that, "we're starting to talk with medical directors of several major private insurance companies in the region to get contracts in place and determine which types of patients will be approved for proton therapy.”

The facility is the effort of a consortium of Memorial Sloan Kettering Cancer Center (MSK), Montefiore Health System and Mount Sinai Health System, which will now begin to send patients for treatment, as well as providing medical expertise to the facility. Its clinical leadership includes the chairs of radiation oncology from all three consortium partners.

Patients from other medical institutions will also receive therapy at the center. “Patients throughout the tri-state area and beyond now have access to the most advanced radiation treatment currently available,” Simone noted.

“The opening of this facility represents an unprecedented commitment to the future of cancer treatment,” said Dr. Simon Powell, chair of Radiation Oncology at MSK. “New York will continue to lead in the struggle against cancer by offering groundbreaking treatment for many of our most vulnerable patients.”

While cancer therapy is increasingly effective throughout the healthcare community, one of the challenges is to manage treatment plans and the demands of getting to appointments. For this reason, observed Dr. Shalom Kalnicki, professor and chair of Radiation Oncology at Montefiore Health System and Albert Einstein College of Medicine, “through our research at the New York Proton Center, we can now explore novel ways to better target and time a form of radiation that spares healthy organs in a way that has never been possible until now.”

The center will both treat area patients and serve as a research site for clinical trials. “Our mission is to deliver both clinical excellence and innovative research that saves lives today and in the future,” noted Dr. Kenneth Rosenzweig, chair of Radiation Oncology at Mount Sinai.