Tips for creating better collaboration between HTM and IT

Tips for creating better collaboration between HTM and IT 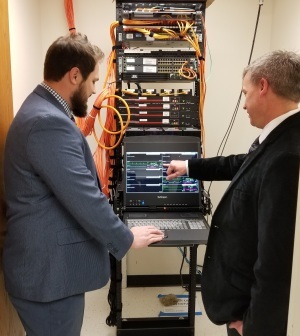 Codi Nelson, CBET HTM Team Leader
(left), discusses patient data flow to
electronic medical records with Kyle Smith,
MMCI Director of Information Systems (right).
About twenty years ago, Scot Mackeil installed the first hospitalwide Ethernet-connected patient monitoring network at his 120-bed community hospital. A senior BMET on the install team, Mackeil specified that all cat5 cable and patch cables be a unique color, so IT staff would know not to accidentally disconnect medical devices in the shared data closets. He also added CE numbers and inspection stickers on the monitoring system’s full disclosure servers and racks as they were installed.

The IT manager, however, was not impressed, and reported the matter to the hospital CFO who criticized Mackeil for his actions.

“He insisted ‘computer equipment’ was NOT biomed equipment and I had no right to tag the servers and equipment in the data center,” recalled Mackeil. “I was told to remove the asset numbers and tags and mind my own business, and was also written up for my ‘transgression’.”

The IT staff was also not happy with Mackeil’s idea of putting the full disclosure servers on the biomed PM schedule and that he asked them to keep him in the loop so he could document service and maintenance of monitoring network servers and equipment in the biomed database.

Fast forward to 2019, and Mackeil, now honored by AAMI as 2018 BMET of the Year, works at a 1200-bed academic medical center in Boston as part of an enterprise-integrated HTM team that responds to any type of service call, from monitor failures to a major server outage, all while coordinating needed resources with informatics team members, including application, software, PC, BMDI, network, and server support specialists.

“Today’s BMETs need to be able to mitigate many common IT/PC/integration problems and know how to collaborate with their IT resources to solve more complex problems.” said Mackeil. “Often a BMET with good computer and IT skills can solve a lot of common problems that would otherwise impact patient care. If a caregiver calls in a specific problem with a certain device or system, BMETs need to know how the device that caregiver is reporting or the system they are having issues with is connected because you need to know what, where and how things are connected to help the team solve the issue when the service call involves connected and integrated medical devices and systems.”

Mackeil and his facility are hardly alone in this changing paradigm. As medical technology takes on a greater IT component, biomedical engineers and HTM professionals are combining forces with the IT department to address issues that require both sets of expertise. Developing these collaborations, however, is not simple, and requires communication, prioritization and most importantly, an understanding of one another’s role and needs.
1(current)
2
3
4
5

From alarm management to AI, patient monitoring gets a facelift

A tale of two kinds of RIS solutions

How can OEMs and in-house service teams work better together?

The rapidly growing value of data analytics in HTM