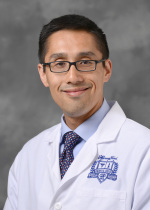 Dr. Marvin Eng
“Part of mission at the Henry Ford Center for Structural Heart Disease is research and clinical investigations in new devices,” said Dr. Marvin Eng, director of research and fellowship director for the center. “Minimally-invasive annuloplasty of the mitral valve gives patients options for repairing the valve, should a traditional surgery be a poor option.”

The majority of patients will experience immediate improvements in their breathing as well as other side-effects of mitral valve regurgitation. In most cases, they will be able to go home a couple days after the procedure.

CardioBand has already been approved for use in Europe since September 2015. Edward Lifesciences is now pursuing FDA approval through the Annular ReduCtion for Transcatheter Treatment of Insufficient Mitral ValvE (ACTIVE) trial.

This prospective, randomized, multi-center trial plans to recruit 375 participants with clinically significant functional mitral regurgitation. The participants will be randomized to receive treatment with either CardioBand plus guideline-directed medical therapy (GDMT) or GDMT alone.

When asked whether non-surgical mitral valve repair will ever replace the surgical approach as the standard of care, Eng said it is a possibility, but that we are quite a way away from that becoming a reality.

“The devices and techniques would have to be so precise that they could emulate surgery,” he said. “Considering the finesse needed in surgical mitral valve repair, it will take some time before we get there.”