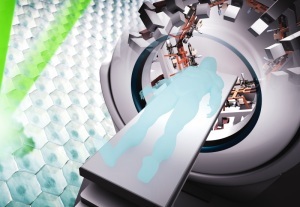 Dramatic cuts to cancer treatment times – and making treatment technology more compact – got a boost from new funding for two accelerator-based projects; one using X-rays, the other using protons, now in the works by the Department of Energy’s SLAC National Accelerator Laboratory and Stanford University.

The PHASER X-ray project uses “rapidly scanned beams from many directions through electromagnetic steering with no mechanical moving parts, and is referred to as pluridirectional high-energy agile scanning electron radiotherapy,” according to a Stanford report on the work. It is designed to create a flash delivery system able to slash radiation times to under a second from minutes, as well as devising compact technology that can make advanced radiation therapy available more widely.

The new funding includes a $1.7 million grant from the DOE Office of Science Accelerator Stewardship program to develop the technology over the next three years. In addition, the Stanford Department of Radiation Oncology is putting in approximately $1 million over the next year to support the work. Along with the School of Medicine, it has also set up the Radiation Science Center, of which the PHASER project is a division.

“Delivering the radiation dose of an entire therapy session with a single flash lasting less than a second would be the ultimate way of managing the constant motion of organs and tissues, and a major advance compared with methods we’re using today,” said Billy Loo, an associate professor of radiation oncology at the Stanford School of Medicine.

The just-received funding will let researchers build such structures, said Tantawi, a professor of particle physics and astrophysics.

Over the last few years, PHASER has developed and tested prototype accelerators with novel shapes. The new designs are already working as predicted in simulations – setting the stage for designs that are more powerful and compact.

That division, co-led by Loo and Tantawi, hopes to turn that concept into a working device.

“Next, we’ll build the accelerator structure and test the risks of the technology, which, in three to five years, could lead to a first actual device that can eventually be used in clinical trials,” Tantawi said.
1(current)
2