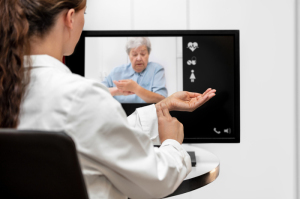 The first nationally representative estimates on use of the technology, the survey recorded that 39.5 percent of radiologists employed telemedicine compared to 15.4 percent of physicians overall for patient interactions that range from e-visits to storing and forwarding health data.

“While regulatory and legislative changes have been implemented to encourage the use of telemedicine, there are no nationally representative estimates on its use by physicians across all medical specialties,” Carol K. Kane, study co-author and AMA director of economic and health policy research, said in a statement. “To fill this information gap, the AMA study surveyed 3,500 physicians to provide needed data that will help assess potential barriers and create strategies to promote telemedicine adoption.”

Additional specialties with high rates of telemedicine deployment included psychiatrists at 27.8 percent, and cardiologists at 24.1 percent, compared to others, which ranged between 6.1 and 23 percent.

When it came to communicating with other health care professionals, emergency medicine physicians took first place at 38.8 percent, followed by pathologists at 30.4 percent, and radiologists at 25.5 percent. Others ranged from 3.3 percent to 14.9 percent, though 26.5 percent of doctors in group practices of 50 or more clinicians were found to be top users too.

Least likely to use the technology were allergists and immunologists at 6.1 percent, gastroenterologists at 7.9 percent, and small-practice doctors with just 1–4 practitioners at 8.2 percent.

Videoconferencing was the most employed form of telemedicine modalities, used by 12.6 percent of physician practices. Emergency medicine physicians used it the most at 31.6 percent, followed by 25.8 percent of psychiatrists and 24.1 percent of pathologists.

Just 9.4 percent of practices made use of "store and forward" of patient data, with radiologists leading the herd at 42.7 percent. Pathologists followed behind at 22.7 percent, along with cardiologists at 14.9 percent.

A total of 17.9 percent of cardiologists, however, did use it the most to remotely monitor patients, the largest specialty to do so out of 7.3 percent of practices.

Despite the lack of greater penetration into day-to-day medical practice, telemedicine can be a big plus when natural disaster strikes a community, according to a RAND corporation study, with one advantage being that out-of-state physicians can quickly step in to respond in a cost-effective manner – as long as cellular and Wi-Fi are functioning in the region.

“We hope that this work will draw attention to this new offering and help policymakers and providers consider how best to leverage it to reduce burden on the local healthcare system and quickly and effectively meet victims’ needs,” Lori Uscher-Pines, lead author of the study and senior policy researcher at RAND, told HCB News at the time.

Looking at the fact that smaller practices and ones owned by physicians had less telemedicine use than bigger practices not owned by doctors, “suggests the financial burden of implementing telemedicine may be a continuing barrier, especially for that segment of practices,” according to the AMA report.

The survey was conducted in 2016 and was published in the December issue of Health Affairs.