Aidoc and ACR announce partnership for AI in imaging 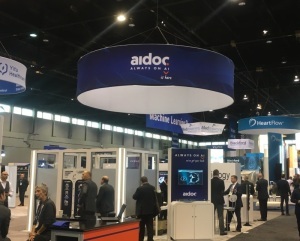 At this year’s RSNA, Aidoc announced it is partnering with the American College of Radiology’s Data Science Institute to create the industry’s first registry for artificial intelligence (AI) in imaging.

The idea is to show how AI solutions work in real clinical settings using the ACR’s history of registries for performance improvement, including collecting data around radiation safety through its radiation Dose Index Registry.

“That infrastructure lends itself to collecting data around artificial intelligence,” Bibb Allen Jr., chief medical officer for the ACR’s Data Science Institute, told HCB News in an interview during the conference. “We have gateways to many institutions already that are able to capture the behind-the-scenes data about the exams through that gateway that exists for other registries.”

The ACR will be creating an application programming interface (API) that will allow them to work with reporting platforms to capture data about how radiologists use AI inferences that are presented and whether they agree or disagree, Allen said.

“So, if the radiologist changed a measurement, or it said there is a nodule and the radiologist erased it, then the reporting platform knows that the radiologist disagreed,” Allen said. “That is captured, along with all that metadata about the scanner, the parameters, the field strength of the magnet, to help developers know where the algorithm breaks and how it can improve its performance in subsequent versions.”

The partnership came about because of Aidoc’s AI solution, which highlights urgent findings in CT exams, such as intracranial hemorrhage, and prioritizes them in the radiology worklist, and its integration with Nuance’s Powerscribe reporting platform, which is currently in use at the University of Rochester Medical Center.

“The big benefit of the ASSESS-AI registry is not for our improvement, but to be able to prove and demonstrate that this works in a multitude of settings,” Walach told HCB News.

Dr. Axel Wismüller, director of the Artificial Intelligence in Radiology Laboratory at the University of Rochester Medical Center, said the success of the registry depends on it being utilized by institutions, and he would like to ensure that no private patient data is shared through the registry.