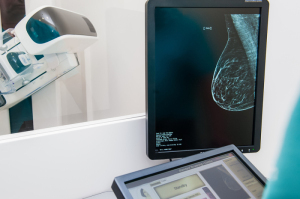 This is one of many recent studies that have demonstrated the benefits of breast tomosynthesis over conventional mammography. This raises the question: is this technology headed toward becoming the standard screening tool?

Dr. Jay Baker, president of the Society of Breast Imaging, told HCB News that although it will happen, it may take another decade. Most insurance companies are now covering the full cost of tomosynthesis in the screening setting and almost all sales of of mammography systems in the U.S. include tomosynthesis capability.

“The rate limiting step at the moment is that the equipment is expensive,” he said. “So as older 2D mammography systems need to be replaced, they will almost certainly be replaced with tomosynthesis systems.”

This new study was conducted by a group of researchers from Lund University and Skåne University Hospital. In addition to increasing the cancer detection rate, they found that tomosynthesis also reduced breast compression, which makes the exam more comfortable for the patient.

The study did find that tomosynthesis was associated with a higher recall rate than conventional mammography, but Baker said that isn’t a cause for concern. He explained that the recall rate is higher in this study because it was conducted in Sweden.

“In Sweden, their baseline callback rate is much lower than it is in the U.S. and Canada,” he added. “Tomosynthesis is simply showing them some of the benign lesions that the European radiologists either weren't attuned to or have been trained to ignore.”

In the U.S., the target is to recall between five percent and 12 percent of women for additional views. In most studies, tomosynthesis has reduced those recalls by 15 percent to 35 percent.

However, recall rates are already well below five percent in Europe. That means that tomosynthesis makes findings that would have been ignored more clear.

The Swedish research team is currently working on a study that is assessing the cost-benefit of tomosynthesis. The team is also working on studies investigating the use of computers to automate parts of the tomosynthesis image review process.

“I do think that breast tomosynthesis will eventually become the standard tool for breast cancer screening, Baker concluded. “As this and other studies show, we can find more breast cancer and often at earlier stages.”