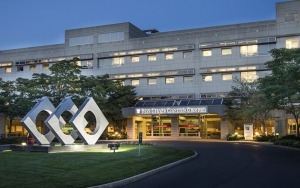 When The National Lung Screening Trial was completed in 2010, it revealed that CT screening high-risk patients for lung cancer reduces the risk of death but also results in a high rate of false positives.

Dr. Martin J. Edelman, chair of the department of hematology/oncology at Fox Chase, believes that a test that looks for cancer-associated macrophage-like (CAML) cells could be the solution.

“In prior studies, CAMLs have only rarely been detected in subjects who did not have cancer,” he told HCB News. “Furthermore, they were seen in patients with early-stage disease. Therefore, if we find CAMLs are present in an individual who has an indeterminate nodule, it would imply a strong likelihood that the nodule was malignant.”

Edelman and his team are currently working on a simple, minimally-invasive test for CAMLs that will serve as a secondary screening option for patients with inconclusive lung CT scans. Fox Chase and the Philadelphia VA Medical Center are expected to start enrolling patients in a study that will evaluate the test later this year.

“Based upon data that has been previously presented in breast cancer, we are optimistic that this will be positive,” said Edelman. “However, we cannot know this without doing the study.”

He added that this trial will provide critical data regarding the prevalence of CAMLs in patients with pulmonary nodules, the sensitivity and specificity of the detection of CAMLs, and its ability to diagnose lung cancer in this setting.

The American Cancer Society predicts that there will be approximately 234,030 new cases of lung cancer this year.