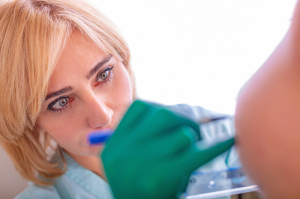 But patients may still opt for it
Many women opt for 3D image simulation to plan their breast augmentation surgery, but does it actually make a difference? A new study published in Plastic and Reconstructive Surgery found that it doesn’t.

“Essentially, the 3D simulation is an effective visual communicator, and a visual depiction of a surgical outcome is more informative we think, than saying ‘C cup,’ ‘D cup,’ ‘much larger’ or ‘a little larger,’” Dr. Terence Myckatyn of the Washington University School of Medicine, told HCB News. “Also, it provides a pretty accurate facsimile of how things will look — good or bad.”

For this technique, the surgeon uses digital photos and imaging software to generate a 3D simulation of what the patient’s breasts will look like after surgery. But since surgeons already achieve excellent cosmetic results with conventional tissue planning techniques, 3D image simulation might not be necessary.

For the study, Myckatyn and his team evaluated 23 women — 10 were randomly assigned to receive 3D simulation and 13 to receive tissue-based planning. However, after the first few months all of the women wanted 3D simulation, presumably due to an increase in awareness from the internet and word of mouth.

The patients filled out a standard questionnaire called the BREAST-Q to evaluate their satisfaction level and various domains of quality of life. The researchers also obtained a detailed set of mammometric measurements to evaluate objective results.

The questionnaire revealed that breast augmentation led to significant improvements in satisfaction with breasts, sexual well-being and psychosocial outcomes. But the use of 3D simulation didn’t appear to contribute to these positive outcomes.

In addition, the mammometric measurements were comparable between the two groups. There was also no significant difference in the volume of implants chosen by women who received 3D simulation from those who received tissue-based planning.

Myckatyn did not investigate why 3D simulation appears to have no effect on patient outcomes, but he speculates that a concept called post-decisional dissonance could be the reason. That concept involves the patient convincing themselves that the decision they made was the right one.

Another reason would be the fact that the BREAST-Q questionnaire isn’t sensitive enough to pick up modest differences between patients. It might not be able to distinguish patients who are "very happy" from those who are "extremely happy".

“It should be noted, though, that while 3D simulation may not have improved patient reported outcomes in our study, there was little doubt that when patients knew they had access to this technology, they were likely to seek it out,” Myckatyn concluded. “Certainly we have had many patients who sought out practices, such as ours, because we have this technology.”