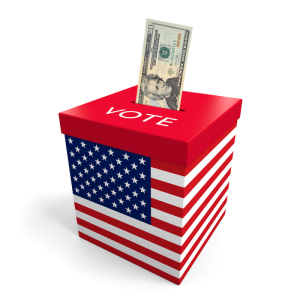 When radiologists make political contributions, they mostly give to political action committees, with the Radiology Political Action Committee (RADPAC) far and away the preferred organization.

Every year about 1,700 radiologists contributed a bit more than $2,000 on average, according to a recently published study of Federal Election Commission records between 2003-2016. The study appeared in the journal of the American College of Radiology.

“With the uncertainty regarding healthcare currently, and the increasing political polarization of the country, we essentially wanted to investigate how self-identified radiologists were contributing,” Amy Patel, M.D., medical director of Women's Imaging at Liberty Hospital and clinical assistant professor at the University of Missouri, Kansas City School of Medicine, and lead author, told HCB News.

RADPAC usually ranks second or third for PAC contributions among medical political action committees, according to Patel. RADPAC raised about $1.2 million a year, according to Ted Burnes, director, RADPAC and Political Education, which was not involved in the study. He said that while radiologists do make donations to candidates on their own, there are benefits to contributing through RADPAC, which is nonpartisan.

“When we make a contribution to a member of Congress’ (MOC) re-election campaign, or federal candidate, they know it's on behalf of radiology and that creates a real connection between the profession and that candidate/MOC. That's real impact,” Burnes told HCB News.

Burnes added that this is important, given that 90 percent of Congress consists of non-health professionals. He said most MOCs don’t understand healthcare nuances, let alone a specialty such as radiology. RADPAC contributions create an opportunity to form congressional relationships, which are vital for advocacy. For example, Burnes said they were able to educate MOCs on the importance of mammography insurance coverage beginning at age 40. RADPAC helped turn back an effort to raise the age to 50.
1(current)
2