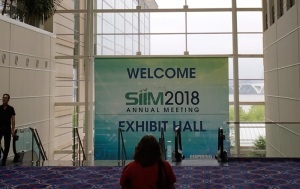 A study out of Boston Children’s Hospital found that radiologists were nearly two times more likely to find abnormal findings in pediatric brain scans, and that they read the scans faster, when they had direct access to normal scans from children of the same age.

The findings, in a poster presented at the SIIM annual meeting in Maryland’s National Harbor, have prompted GE Healthcare to develop new clinical decision support tools to help with the diagnosis and treatment of childhood illnesses.

With pediatric brain scans, it is difficult to discern a difference between regular childhood development and abnormalities, the study’s author, Dr. Sanjay Prabhu, told HCB News.

“The problem is, because it’s symmetrical change, errors occur in the way you read the scans,” Prabhu said.

For the study, 14 radiology trainees, including 12 neuroradiology and pediatric radiology fellows and two radiology residents, were shown a set of 11 brain MRIs of patients up to three years old with a mix of normal scans and those with white matter abnormalities.

The trainees answered questions about the scans using tools such as online resources and textbooks, and recorded the time it took them to answer the questions. They then looked at the same cases while also having access to a set of age-matched normative reference images.

When the study participants saw the normal images, they were two times more likely to accurately distinguish between abnormal and normal brain development; this decreased the likelihood of false negatives. They also read the scans 45 percent faster.

“I knew there would be some difference,” Prabhu said. “Turns out there was a huge difference.”

Boston Children’s Hospital decided to work with GE to create the tool for viewing the normal scans alongside the diagnostic images.

“We went through a bunch of partners and we found that GE was receptive to pediatric applications, which are niche,” Prabhu said. “GE was interested in seeing what was most helpful to us on the pediatric side, and was ready to listen.”

Prabhu said the next step is for GE to present the cloud-based, vendor-agnostic tool to its other pediatric imaging partners.

"We are excited about the progress made to date and the results presented at SIIM, and anticipate commercial availability within the next six to 12 months,” Dr. John Kalafut, imaging outcomes and solutions leader for GE Healthcare, told HCB News.