Is 7-Tesla MR a game changer for imaging Cushing's disease?

Is 7-Tesla MR a game changer for imaging Cushing's disease? 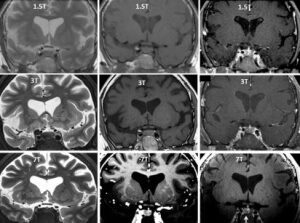 30%-40% of Cushing's disease patients
have this problem
Researchers at the University of Southern California successfully evaluated a tumor with 7T MR imaging that previously could not be detected with a 1.5T scanner.

The patient was diagnosed with Cushing’s disease, which is caused by a very small tumor that results in chronically elevated cortisol.

Between 30 and 40 percent of those patients have tumors that are too small to register on a standard MR scanner. Because of that, an invasive procedure called inferior petrosal sinus sampling has to be used to diagnose them.

This new finding suggests that 7T MR could help these patients avoid an invasive procedure and make the neurosurgeon’s job easier because it shows them the exact location of the tumor in the gland.

Dr. Gabriel Zada, a neurosurgeon and associate professor of neurosurgery at the Keck School of Medicine at USC, told HCB News that it’s too early to tell if 7T MR will become the standard for assessing patients with Cushing’s disease.

“There is a possibility that it will become a useful tool for current MR-negative Cushing's disease,” he said. “Additional studies will need to be performed and compared to the current gold standard. These additional research studies are currently underway at USC.”

“The indications of this relatively new technology are still rapidly evolving,” said Zada.

Build, repair, and maintain: The ins and outs of RF shielding