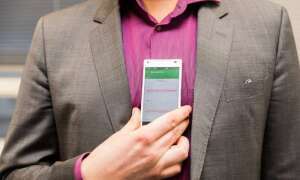 96 percent accuracy rate
A smartphone application developed at the University of Turku, Finland, is capable of diagnosing atrial fibrillation that causes stroke.

“We use the accelerometer and gyroscope of the smartphone to acquire a heart signal from the patient,” Tero Koivisto, project manager of the Department of Future Technologies at the University, told HCB News. “A measurement recording is taken, and the acquired data is preprocessed by signal processing methods.”

He added that an algorithm then uses multi-axis autocorrelation to find regularity from the measured signal. The final result is a yes or no answer as to whether the patient has atrial fibrillation or not.

Koivisto and his research team evaluated 300 patients with heart problems — half of which had atrial fibrillation — using the smartphone application. The research was conducted as a blind study, so they received measurement data without any additional information.

They found that the application was 96 percent accurate at detecting the patients with atrial fibrillation. In addition, the number of false positives was low.

According to chief physician and professor of cardiology at the university, Juhani Airaksinen, this is the first time that consumer electronics have achieved such reliable results. The researchers are working toward making it so everyone who has a smartphone can detect atrial fibrillation.

Koivisto believes this technology can be also used to detect other heart conditions like myocardial infarction.

The team wants to make the applications available to the public as soon as possible. They reported that the commercialization method is advancing quickly and that it may also spread to the international market.